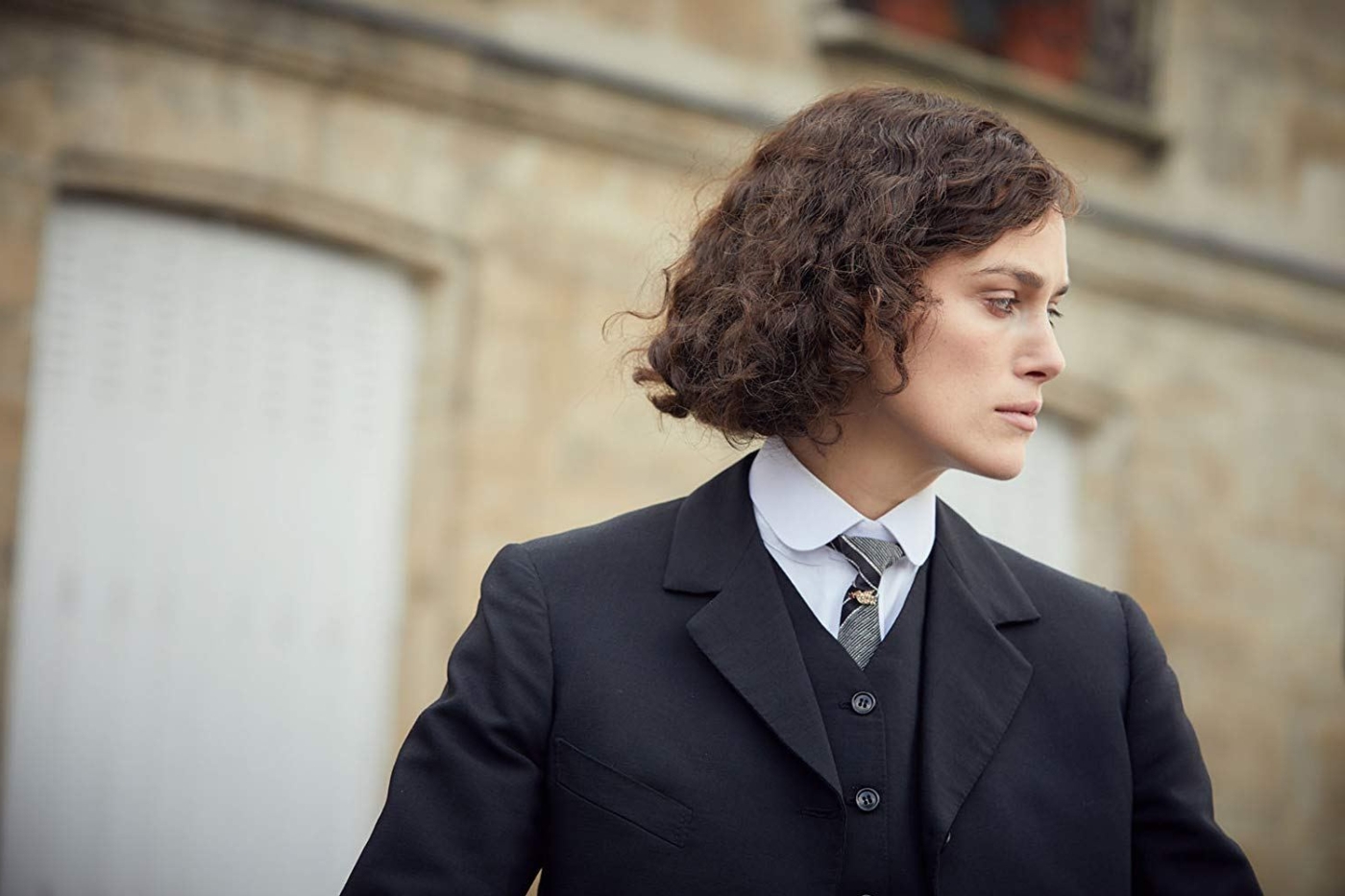 “Colette” (2018) is a historical drama starring Kiera Knightley about power dynamics, writing, and societal expectations; and how gender impacts all of them. Much of the film is focused on the marriage between Colette (known at the start of the film as Gabrielle) and Willy, played by Dominic West. She’s a young woman from the French countryside, enamored with this confident Parisian man fourteen years her senior. They are quickly married, but almost immediately there is a sourness to it.

In an early scene, Willy takes Colette to a high society party, parading her around like a trophy to the wealthy socialites present before abandoning her to go flirt. She finds herself identifying with a tortoise, encrusted with jewels, placed on a shelf as decoration in a bit of blunt but effective symbolism.

Willy exerts control over Colette in several ways, but the film focuses largely on her writing. She begins writing at his demand. When the pair are put under financial stress, Colette suggests they budget, but Willy instead puts her to work as his ghost-writer. Despite this setup, Colette finds a passion for writing. She puts her life and soul into the Claudine books, essentially writing slightly altered autobiographies. They’re a massive success, the toast of Paris, and all of it under Willy’s name.

He takes credit for every word, bathes in the adulation of Colette’s hard work. When she doesn’t write quickly enough for his liking, he locks her up until she does. He takes her passion and grinds it down into profit. Willy claims that Colette’s writing is “too feminine” and that “women writers don’t sell” to justify his control over her work. This reflects the way many women have been – and often still are – treated in the arts.

Meanwhile, his limited attempts at writing display his attitudes towards women, he describes his idea for a female character as “18”, “gorgeous”, “dangerous”, “devours men”, “never wears a corset”, and she is the sexual partner to a blatant self-insert protagonist. It’s essentially bad fanfiction. When he finally attempts to write a Claudine book by himself, he can’t.

He is a terrible writer who is constantly denigrating Colette’s work and making her feel like she needs to prove herself to him despite her being infinitely more talented and skilled than him. This is emblematic of how women in the arts have been treated throughout history, working harder and better than the men around them to achieve even a fraction of their success.

Of course, Willy isn’t just an awful writer, he’s also an awful critic. He’s almost a caricature of the worst kind of male media critic; more interested in writing creatively scathing metaphors than actually analyzing art. He seemingly only writes negative reviews, saying there should be “no middle ground” and to “just kill it”. He values plot above all else, dismissing Colette’s writing as having “no plot” and “nothing driving it”. These attitudes might sound familiar to those aware of the dominant voices in YouTube film criticism in the early 2010s. Men’s dominance in media criticism arguably led to these unhelpful approaches becoming so commonplace, it’s a good thing that sites like this are being created to change this.

Returning to the narrative, Willy’s control and admonishment of Colette’s work continue to the point where he has ruined writing for her – turning it into a form of punishment and commodifying her work to the point where it seems as if half the women in Paris are dressing up as Claudine. Colette associates writing directly with the abuse Willy has inflicted on her.

It is during this period of the film that Colette starts exploring gender non-conformity. She chooses her name (one which Willy never uses), she changes her gender presentation (beginning the film in frilly country dresses and waist-length pigtails and slowly changing to things like culottes and wearing her hair up or cutting it short), and she even explores queer attraction and relationships.

“The experience of meeting Missy has a similar effect on Colette to many gender-questioning youth’s first exposure to trans identity, it’s revelatory, it contextualises all of her feelings around gender.”

But when Missy arrives in the film it’s like an epiphany to Colette. Missy is a character who could very easily be read as trans, both in the film and in real life, which is something the film heavily leans into. Missy describes his childhood in a way that will be immediately recognizable to virtually all transgender viewers: feeling awkward and out of place as a kid until he tried on a boy’s uniform and “felt home for the first time”.

Missy also switches to he/him pronouns later on in the film and Colette makes a big deal of respecting them, while Willy ignores them entirely. Though the casting of a role blatantly coded as trans masc with a cis woman is deeply questionable, despite the presence of trans actors in a couple of minor roles in the film.

The experience of meeting Missy has a similar effect on Colette to many gender-questioning youth’s first exposures to trans identity, it’s revelatory, it contextualizes all of her feelings around gender and gives her an anchor around which she can build herself. She begins wearing Missy’s suits and dressing more androgynously, beginning a romantic relationship with Missy. She also discovers a new passion in the form of the new artistic medium of mime.

But once again, Willy reaches back into her life and commodifies both her passions; mime and Missy. Following this, and Willy’s final betrayal of selling the rights to the Claudine books without Colette’s knowledge or consent, she finally leaves him for good. By embracing her gender non-conformity, Colette escapes the box that she was expected to remain in and discovers herself.

‘”Colette” is ultimately a film that explores power through the lens of gender…Colette’s journey is one that remains relevant, and one that many of us can be inspired by.”

The film concludes with Colette rediscovering her love of writing, free of the abuse Willy inflicted on her, writing another massive hit under her name. She would later go on to be nominated for the Nobel prize in literature. The film ends with her emerging on stage, a crowd chanting her name. In contrast to earlier in the film when crowds chanted Claudine’s name to praise Willy for her work, now they chant her name – her chosen name – to praise her for the hard work she has done.

Colette finally receiving the praise she worked for and deserved all along. Praise that was stolen from her by a man who relied on her talent to succeed, and ultimately needed, failing to continue the success in her absence. Praise that she was only able to claim by recognizing and subverting the patriarchal gender roles that society had placed her into. “Colette” is ultimately a film that explores power through the lens of gender: in marriage, in art, and life. Willy is a character who embodies the mediocre man who cannot survive without the successful woman he keeps under his thumb, using her talent to fuel his wealth and ego.

Colette is a woman (or could be read as non-binary) restrained by the role assigned to her based on her perceived gender, who escapes that confinement – and the abuse of her husband – through a journey of self-actualization. She finds herself through gender non-conformity, embracing her queer sexuality and expressing herself through her passions. And, given how women, queer people, trans people, and gender non-conforming individuals are still held down today, Colette’s journey is one that remains relevant and one that many of us can be inspired by. After all, the only reason we even know about this story is because Colette broke out of that box.

One thought on “Colette: Writing, Gender Identity and Escaping the Patriarchy”