Although it boasts some creative practical effects and some fun performances, Chelsea Stardust’s feature directorial debut, “Satanic Panic” (2019), lacks the fun horror and comedy punches and comprehensive storytelling to be the great midnight movie it wants to be.

The film follows Sam (Hayley Griffith), a plucky yet down on her luck pizza delivery girl as she’s flat broke. With the first day on the job not giving her the financial success she needs; Sam takes one last route to a wealthy area of town. However, when they stiff her on the tip, she enters the patron’s home only to find out that they are a group of Satanists ready to perform a sacrificial ritual. With them on the hunt for a virgin to sacrifice and Sam fitting the bill, she must escape the grasp of the cult before they can use her to summon the dark forces of Baphomet. 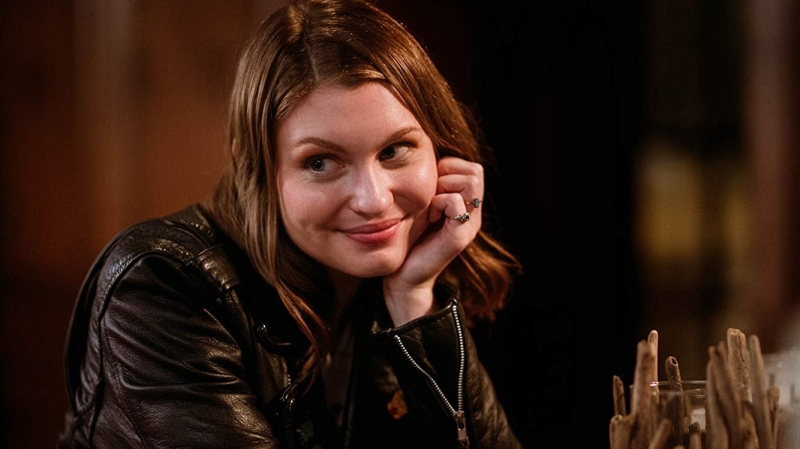 Now, when I’m about to sit down for a midnight “B” movie, there’re just a few things I’m itching to see. I’m gearing up for the blood and gore, hilariously entertaining characters, a story full of devilishly funny moments, and over-the-top performances. Not to mention, I want the highest quality of cheese that puts a cheesy grin on my face. “Satanic Panic” does this at times, however, it ends up being hard to enjoy with how dull and annoying Sam is as a protagonist and how weak the story is.

My issue with Sam is that her character isn’t all that interesting and the film often characterizes her a seemingly dumb. I don’t know about you, but when I’m in a room with a group of people and they all of a sudden just say “Hail, Satan” – I’m getting the hell out of there. Somehow this slips away from Sam and she’s constantly so oblivious to what’s happening around her that viewers end up feeling nothing towards her and just being annoyed with her every decision.

“The most enjoyable and funniest parts of the film definitely come from the cult as the performances are entertainingly campy…outside of the excellent costume and set design, there isn’t much that viewers will find super interesting or unique about the Satanists as the film doesn’t explore much of their mythos.”

There really isn’t much to flesh out her character either as we don’t get know her much, outside of one scene, and the writing for her doesn’t do much other than make her a damsel in distress with no change in her arc. The way the camera pans on her body and the way other characters talk about it is also kind of weird as it feels like the film is obsessed with it. Part of me got the feeling that Sam was depicted this way to show how fixated the cult is on her being a virgin, but it just comes off as strange. Griffith isn’t really given much to work with either and I wish that Stardust gave her the green light to just go all the way with her performance like she does with other characters.

The most enjoyable and funniest parts of the film definitely come from the cult as the performances are entertainingly campy. Rebecca Romijn gives a dominatingly solid performance as the cult’s leader with her full commitment to the role leading to some funny moments as she attempts to keep everyone in line. Arden Myrin’s performance is also pretty great as she constantly tries to undercut Romijn’s Danica at every turn and they are given solid direction from Stardust to create fun, campy characters for viewers to like.

However, outside of the excellent costume and set design, there isn’t much that viewers will find super interesting or unique about the Satanists as the film doesn’t explore much of their mythos. Personally, because of how little the cult is explored and how dull Sam can be, there’s very little to enjoy about the film’s story and it’s so lackluster of details or exposition that some plot points are impossible to follow.

Not to mention, for a horror/comedy, it heavily lacks on the comedy. Outside of Romijn and Myrin’s performances and a handful visuals, the film’s humor never lands and the script really needed to be punched up and allow characters to break their mold to give viewers the wild and wonderfully campy good time they’d want from something like “Satanic Panic.”

“Even though “Satanic Panic” has some makings of a solid midnight “B” movie, it just can’t muster up enough fun for viewers to want to hang on for the whole ride.”

Like I said before, though, the film has some excellent gore effects that are perfectly over-the-top and some elements of horror that are interesting to see. The creature design and all of the bloods and guts that start to spill once the cult starts to hunt Sam down will please any gore hound. Honestly, outside of one drowning sequence, I was pretty impressed with how good the effects were and there’s a particular scene that I felt showcased Stardust’s talents in creating a solid horror sequence. 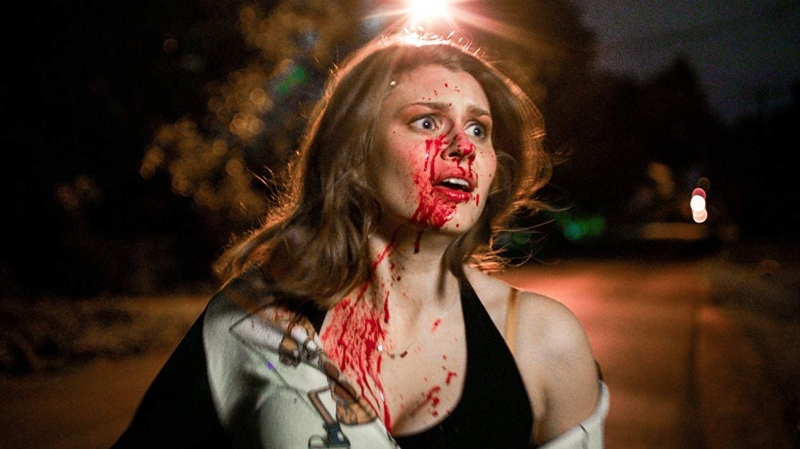 There’s a great moment where we finally get to understand Sam better as she tries to help a friend as the Satanists are trying to kill her using a voodoo doll. There’s a great amount of cutting back and forth between Sam and the cult, great gross-out effects that are, well, effective, and some creepy visuals of Sam writing something on her friend’s skin and the cult chanting that make for a solid horror sequence.

So, even though “Satanic Panic” has some makings of a solid midnight “B” movie, it just can’t muster up enough fun for viewers to want to hang on for the whole ride and, ultimately, ends up being completely forgettable.