Hong Kong writer/director Heiward Mak (aka Mak Hei-yan) has led a very interesting filmography over the years. During her humble beginnings, at age 21, she started off as a scriptwriter (alongside female stalwarts Teresa Mo and Aubrey Lam) in the highly troubled comedic sequel, “Men Suddenly In Black 2” (2006); a dark comedy about the women who plot revenge on their male partners over their misdeeds.

Later on, she was sought after by renowned actor Eric Tsang to make her striking directorial debut at age 24, “High Noon” (2008), a gripping teenage drama about seven male students and their turbulent lives in Hong Kong. Garnering many awards and nominations (including a nomination for Hong Kong Film Award for Best Director), she had also won an award for her hilariously acerbic screenplay in director Pang Ho-cheung‘s rom-com “Love in a Puff” (2010).

Since then, she has made two more features; the glossy, yet skin-deep relationship drama “Ex” (2010) and the disappointingly compromised dramatic indictment “Diva” (2012); films that were seen as disappointments due to Mak not reaching her true potential in terms of her examinations in her themes in her stories. Although it must be said that for Diva, a film that is meant to indict the Hong Kong music industry was produced by the same music company it was meant to indict.

After the release of “Diva”, it was said in an interview that she had suffered severe bouts of depression due to her deliberation about what types of films she wanted to make in the future, which resulted in the underseen dramatic film, “Uncertain Relationships Society” (2014).

“Mak also manages to take the potentially mawkish story away from emotional tearjerking manipulation. The conflicts and reconciliations are all surprisingly realized with nuance — without resorting to histrionics or melodrama.”

Set in present-day Hong Kong, Cheng stars as Acacia, a travel agent who suddenly receives news of the death of her estranged father, restaurant owner Ha Leung (Kenny Bee). The two have not spoken in a long time due to her anger toward him over his infidelity to her mother.

In spite of that, Acacia is still emotionally driven when she finds out about the existence of Branch (Megan Lai), an androgynous Taiwanese pool-player; and Cherry, a webcam girl fashion guru — her two sisters, both from different mothers, that she never met.

Over their time together, the three women team up to save Ha’s hot pot restaurant and settle his debts, and in doing so they connect as a family unit, grieve for their father and reconcile their personal relationships to him (as well as their own relationships i.e. Branch’s mother and Cherry’s grandmother) and their perception of who he was.

Mak explores her characters with intimate detail and gives her lead actresses plenty of material to chew on; with their own subplot and arcs that represent the common obstacles and flaws that the three share as well as the generational gaps on women i.e. Cherry struggles with her grandmother’s (Wu Yanshu, perfectly straightforward and stubborn as the matriarch) desire for her to find a husband, while Branch has a tense relationship with her mother (Liu Jueichi, brilliant as the misguided and frugal mother) thanks to her father’s past affairs.

Mak also manages to take the potentially mawkish story away from emotional tearjerking manipulation. The conflicts and reconciliations are all surprisingly realized with nuance — without resorting to histrionics or melodrama — as the three share a common ground (hiding their emotions in order to get more opportunities and chances in life) whilst coming to a mutual understanding and establishing a sisterhood, where they can support each other through moments of loss, grief and struggle without judgment nor antagonism.

Speaking of antagonism, all the male characters are refreshingly peripheral and are not contrived in a way that they are props to introduce conflict for the female leads i.e. the presence of Bee as Acacia’s father or Acacia contemplating the continuance of her relationship with her ex-boyfriend she has no real romantic affection for rather than beginning one with a doctor, whom is smitten by her and excites her via her intellect. Both relationships being in contrast of each other, not only shrewdly shown as Lau drives her around, while Ren teaches her how to drive, but are played by actors whom Cheng had on-screen romantic couplings with in her prior rom-coms. 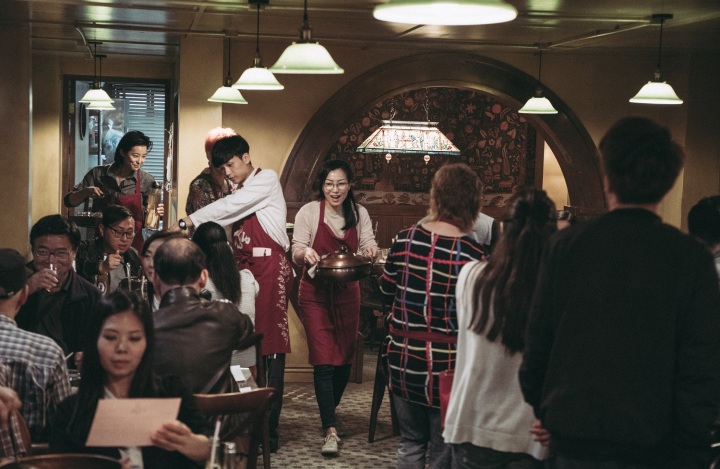 The synopsis may sound like a depressing slog, but the story is interspersed with moments of unexpected, yet welcome use of humour i.e. the sisters’ belief that a cockroach might be the reincarnated spirit of their father and Acacia getting her dad’s religion completely wrong at the funeral.

But one thing that is definitely not wrong or misjudged is the cast and their fantastic performances. Li Xiaofeng (last seen in Feng Xiaogang‘s teen war drama, “Youth” [2017]) is wonderfully idiosyncratic as Cherry, as her presence is quite unpredictable as to how she comes off; especially when she makes her first appearance early in the film. Her bond with her grandmother is nicely handled with both comedic and dramatic aplomb.

“Heiward Mak’s “Fagara” is not only a great return to form for Mak; not only it is her best film to date, but it is one of the best Hong Kong films of the year.”

Sammi Cheng, best known for her romantic comedies, has proven her dramatic chops before (even in weird fantasy films like Johnnie To‘s “My Left Eye Sees Ghosts” [2002]), particularly with using her physical expressions. Under the directorial guidance of Mak, Cheng gives her best performance yet; managing to convey the emotional conflict and turmoil with her physical presence alone.

Yet the biggest standout of the three actresses is Megan Lai, who gives a magnetic and cool presence as Branch, balancing her character’s sexuality (conveyed via her living situation, her interactions with her family and her complicated love life) and her innately desperate yearning for an emotional release and connection to her mother with remarkable ease.

Heiward Mak‘s “Fagara” is not only a great return to form for Mak; not only it is her best film to date, but it is one of the best Hong Kong films of the year as well as the best female-led film since Kearan Pang‘s relationship drama “29+1” (2017). Go see it in cinemas!

Rating: Four and a half stars out of 5.