“Valerian and the City of a Thousand Planets” (2017), directed by Luc Besson is colourful, exciting and fast-paced. But it fails women in so many fundamental ways I left the cinema feeling angry. The film consists of Valerian (Dane De Haan) and Laureline (Cara Delevigne) conducting a series of short term errands and rescue missions. It all revolves around an alien species trying to recover a small creature and a pearl so they can re-establish a home planet. Meanwhile, a corrupt Commander Arun Fillit (Clive Owen) tries to kill those aliens to cover up the fact he destroyed their planet.

“Valerian” is based on a French graphic novel called “Valerian and Laureline”. The series of short term plotlines and multiple locations required for engaging graphic novel storytelling serves the visuals of the film well. Graphic designers take us from one stunning planet to another. But the plot suffers as our protagonists spend only a few minutes on each errand before moving to the next.

Of course, any film adaptation will be restricted by the source material. But there are still choices to be made in every element of filmmaking. Those choices can either enhance and empower women and minorities or they can undermine. Unfortunately “Valerian” undermines women at almost every turn.

Laureline is one of the two protagonists and she is given agency, physical strength, and skills. She gets a couple of faux feminist lines thrown in but on the whole, she’s a strong lead. But note that the film was not given the original title “Valerian and Laureline”, her name was removed.

Besson could have created a diverse world with female leaders, military personnel, guides, and background characters. Any number of many characters could have been female, despite what was in the source text. But he chose to create a world almost entirely devoid of either female humans or female aliens. Almost every single character is male from the military leaders down to the male jellyfish sitting on the male underwater creature the “bromosaurus”.

“Valerian and the City of a Thousand Planets” (2017), is colourful, exciting and fast paced. But it fails women in so many fundamental ways I left the cinema feeling angry.”

Is the audience expected to suspend disbelief for a world filled with over 3,000 species of aliens, but to imagine women in positions of power is a step too far? The precious few women that exist in this world are shown serving men food, holding their hats, or offering sexual services. When addressing a group that included both Laureline and the only other woman in the military the Minister says “Gentlemen, lady, good luck”. The singular ‘lady’ here is telling. There is literally only one woman worth noting. 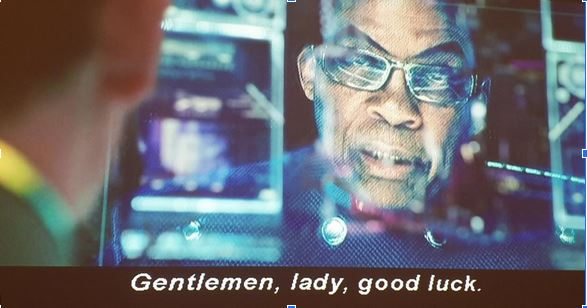 The biggest role for a female character other than Laureline is Bubble (Rihanna). Bubble is introduced to the audience via a sexy burlesque dance and being gawped an open-mouthed Valerian. She’s a shapeshifter so her performance involves a series of sexy outfits, including “sexy schoolgirl”. Her only concern in her dying moments is that she put on a pleasing performance and that Valerian should establish a relationship with Laureline. It is not clear why she cares so much about that apart from for the filmmakers to give legitimacy to an inappropriate, predatory relationship.

From the very first scene, Valerian sexually harasses Laureline. He’s a Major and she’s a Sergeant so he’s her superior. Laureline clearly physically and vocally rejects his advances many times.

“I don’t want to be another name on your list of conquests thank you very much.”

Moments from beginning a dangerous new mission Valerian straight-up asks Laureline to marry him for the first of multiple times. She replies “Not funny” and turns away. But he insists. “Laureline, I’m serious” he pleads. Turning back, Laureline gives him a quick kiss on the cheek and says “now go!”

Valerian looks back at her with a confident smirk which says we’re supposed to take the kiss on the cheek as Laureline showing she has a crush on him despite all of her words and other actions saying she doesn’t. Frustratingly, there is occasionally a playful tone to their relationship. The suggestion is that despite clearly rejecting the sexual advances of her workplace superior, Laureline does actually have a soft spot for him. This rhetoric is frequently seen on screen and it reinforces the false narrative that women say “no” when they mean “yes” and that men just need to persist in their advances. 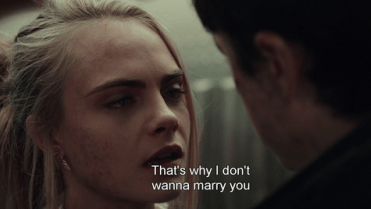 In a strange scene, partway through the film they physically fight and Valerian grabs Laureline from behind. The rest of the conversation takes place with him holding her immobile.

“You are an amazing woman, Laureline. It’s no wonder I wanna marry you”

“Why would I wanna marry an ungrateful, conceited-“

“Because you can’t live without him. I mean look, whenever he wanders off you go chasing after him”

“I was just doing my job, Major. Now will you please let me get back to the mission”

Laureline’s intentions and motivations are called into question as Valerian lets her go with another suggestive smirk. In the final scenes, his persistence actually pays off. After Laureline declines yet another marriage proposal she delivers a speech about love and empathy. Valerian agrees to return a pearl to its rightful owner and is rewarded with a kiss on the mouth. Just minutes after saying “I don’t want to marry you because you really don’t know what love is” Laureline appears to change her mind.

Laureline had to directly tell Valerian to have compassion for another creature before he did it. And the moment he showed the bare minimum effort he was immediately rewarded.

This kind of storyline is just one element that supports rape culture. It says that women do actually want to sleep with men even when they say they don’t.

Another element that undermines Laureline in this film is the costume. The first time we see her she’s in a bikini on a virtual reality beach, being ogled by Valerian.

For her next costume, she’s working alongside Valerian at the virtual reality shopping world Big Market. She has hotpants, a revealing top and an overshirt which is both see-through and has holes in various places to reveal more skin. In comparison, Valerian gets long shorts, a vest, and a Hawaiian shirt. He is not sexualized at all.

“If filmmakers can imagine and design a series of planets, societies, technologies, and alien species it shouldn’t be too much to ask that they fill those spaces with appropriately dressed women who are not constantly harassed.”

After completing their first mission they are both shown in military uniform, which for Laureline includes a mini skirt. This is a completely impractical and inappropriate uniform.

Moving into the next mission Laureline is given what’s known as ‘boob armour’. This is armor with impossibly large breasts built-in. Often comically large and physically impractical, boob armour is used to increase the breast size of the character and make sure they continue to look feminine. This kind of armour decreases movement and increases the risk of injury. In reality, a good sports bra would compress breasts and the armor that would cover it would need to be flatter to remove the weak point at the center, increase movement and direct blows away from the sternum.

All of these costumes show that the filmmakers wanted Laureline to look sexy rather than particularly powerful or comfortable. On the whole Laureline’s qualities are far outweighed by the way she is treated by Valerian, her costume and the fact that she is very nearly the only female in the galaxy. If filmmakers can imagine and design a series of planets, societies, technologies, and alien species it shouldn’t be too much to ask that they fill those spaces with appropriately dressed women who are not constantly harassed.