Brian De Palma‘s “Carrie” (1976) is such a staple of American horror that any director (regardless of their gender) would have had trouble trying to step into De Palma’s shoes. When it was first announced that there would be a remake of Stephen King‘s Carrie, many of us held our breath. However, director Kimberly Peirce (“Boys Don’t Cry”) manages to pull off this challenge and modernizes the text for a Generation Y audience who have been brought up on a diet of social media and the internet. Stepping into the prom shoes of Sissy Spacek is Chloe Grace Moretz who delivers a decent performance, making her version of Carrie a lot more likable and relatable. Moretz’s Carrie has a unique vulnerability to her performance and we see the pain she is going through captured in her wide eyes.

Carrie White (Chloe Grace Moretz) is a loner who does her best to keep to herself until the unfortunate day when she gets her first period in the girls’ locker room. Instead of kindly helping her, the girls play a cruel trick on her and even record her frightened reaction on their cellphones. The video goes viral around the school and Carrie is publicly humiliated. Feeling remorseful, popular girl Sue Snell (Gabriella Wilde), convinces her boyfriend Danny (Ansel Elgort) to ask Carrie to prom. However, there is the issue of Carrie’s abusive mother (Julianne Moore) who demands Carrie to decline the invitation and repent for “becoming a woman.” There are bigger issues for Carrie to worry about, as she starts to recognize that she has telekinetic powers, and there’s the threat of the sadistic Chris (Portia Doubleday) who is planning to once again publicly humiliate Carrie. 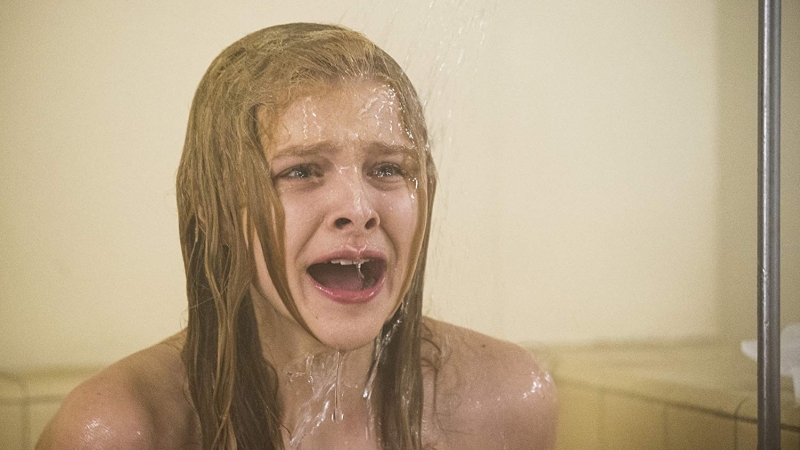 As much as I enjoy De Palma’s “Carrie”, his film is very dated and the male gaze runs deeply throughout his picture (his shower scene is a slowed down male fantasy depiction of the inside workings of a female locker room). Peirce’s “Carrie” is rooted in realism and grounded in reality, despite being a film about the supernatural. The shower scene where Carrie first gets her period is highly relatable to any young woman who has been subjected to bullying. While De Palma seemed obsessed with the visual pleasure of the female boy. Here, Peirce is more interested in the inner turmoil of Carrie and capturing her distress. And, Peirce manages to capture the complex hierarchy of high school life, and the pressures that this current generation has to endure, in a far more sophisticated manner.

While De Palma’s version could be read as a deliciously black comedy, there’s nothing really funny about Peirce’s version. The horror that Carrie is subjected to is amplified by the use of modern technology, and bullying has evolved from the simple name-calling which is depicted in the 1976 version. Now Carrie’s humiliation is immortalized by social media and becomes viral for the entire world to see. Cyberbullying is an epidemic that no other generation has experienced before.

According to Techjury.net: 34% of kids in the US have experienced cyberbullying at least once, 42% of LGBT youth have experienced cyberbullying, and 66% of female victims have feelings of powerlessness because of cyberbullying. Peirce’s version helps to bring the true horror of the situation to our attention and while the film feels a little burdened by unnecessary special effects and doesn’t really expand on the original film’s narrative, she still manages to pull off a rather difficult task.

Overall, “Carrie” is worth revisiting and while I don’t like remakes in general, I must say this one was quite an expected treat. Julianne Moore is an absolute delight as Carrie’s overly religious and abusive mother, and she really is in her element here. As stated before, Chloe Grace Moretz does her best to step into such an infamous role and she has fun when she gets to carry out her revenge at the prom. And, there is an interesting take on “Carrie”‘s ending which is far scarier by today’s standards and which I suspect will cause many women will recoil in horror.