10-year old Lucia (Santi Ahumada) and her family embark on a four day holiday with both Lucia and her younger brother Manuel (Emiliano Freifel) riding in the back seat of the car. Across the four days a happy family break slowly turns into a childhood-defining realisation that her parents may be splitting up.

In the opening scene we see a sleeping child being carried to the car to start the journey. There is already clear tension between the two adults and as they close the gate and drive away we get the feeling that something of the old life is about to be left behind.

Sotomayor accurately recreates the long suffocating feeling of long family car journeys that a lot of us will be able to relate to. Time is filled by gazing out of the window even though it “all looks the same”, or irritating the adults with endless rounds of twenty questions. But in the background is a tension between the adults and a serious problem we don’t yet understand.

There is an underlying theme of freedom and rebellion in the film. Parents Fernando (Francisco Perez-Bannen) and Ana (Paola Giannini) mention lost youth and previous rebellious days. Lucia is on the cusp of experiencing this for herself to the jealousy of her mother.

Lucia is fascinated and inspired by two older girls when her father picks up some teenage hitchhikers to annoy his wife Ana. They’re independent and brave young women who plait her hair and say they know how to drive. This sparks a desire to grow up in Lucia and she starts to ask her parents to teach her to drive too.

Sotomayor uses very static camera shots throughout much of the film, turning us into passive observers like Lucia and Manuel. We stare at the backs of the adults’ heads or out of the front window for fairly long takes. 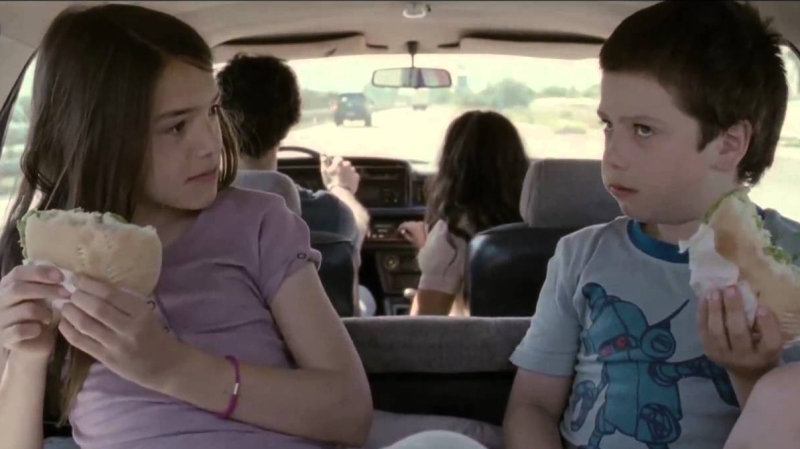 The style of the film has similarities with Joanna Hogg’s work in that the fixed-camera and long shots force us to explore the frame and the nuances of the performances. We start to notice subtleties of the interactions without it being handed to us on a plate.

This viewing style matches the central theme of the film. A girl starting to notice interactions around her and coming to the slow realisation that something is rotten.

At times the fixed camera shots are countered with a more fluid handheld and urgent style, shot from Lucia’s perspective. These are used at times when Lucia is either distressed or breaking out on her own. The difference between the two styles is not jarring but noticeable enough to indicate a shift in Lucia.

As we focus on small details rather than action the pacing can drag in places. Such is the nature of both this kind of filmmaking and the subject matter. But focus your attention and you’ll be rewarded with a coming of age story that’s beautifully acted, highly relatable and very poignant.