It seems fair to say that most parents have plans and ambitions for their children’s future, and this is only natural or at least expected, but what happens if the child turns out to be someone for who those goals and ambitions are no longer appropriate?

What do you do with the daughter who stubbornly refuses to marry that filthy rich megalomaniac that you’ve had your eye on as a son in law for years? What if you have a perfect beautiful beauty pageant family but you also have that one stick-in-the-mud daughter who refuses to stop eating cupcakes? And what’s a parent to do if their successful and talented daughter wants to steer her own career and personal life into waters they find unappealing?

Well, apparently Paradise Hills has the answer to all your rehabilatory needs. Mostly behaviour based, parental desires are met here with the cold and forbidding touch of Milla Jovovic as ‘The Duchess’, ready to hand out rewards and punishments as she sees fit. Uma (Emma Roberts) is she of the ‘refusing marriage to a megalomaniac’ fame, finds herself newly housed in Paradise Hills, the secluded island crawling with rosebushes and hidden agendas. Its sole purpose to turn your wayward child into an obedient daughter, all done with the personal touch of a program designed specifically for your little angel. 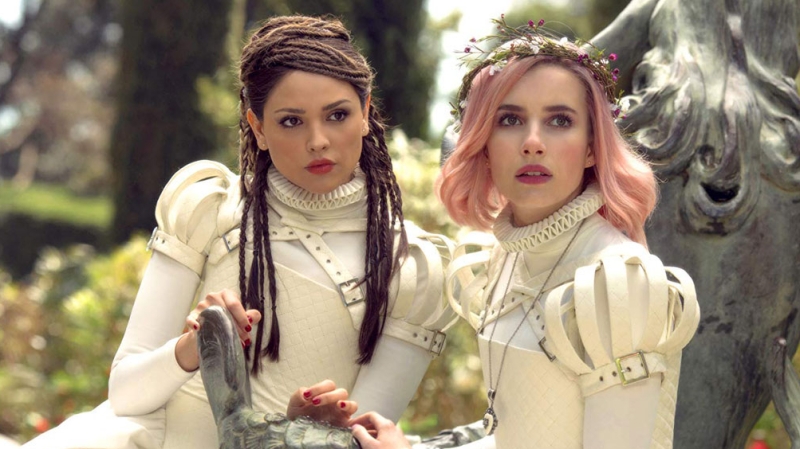 After her initial bout of rebellion after which she finds herself waking in the less than affectionate arms of the Hills, Uma discovers a safe haven in the friendships of Chloe the cupcake eater (Danielle MacDonald), the troubled loner Yu (played by the always brilliant Awkwafina) and the seductive and sexually ambiguous Amarna (Eiza Gonzalez) as a rich singer who only wants to go her own way.

Initially, seeming kind and thoughtful, The Duchess turns out to be quite malevolent as she sits in her rosebush like a fat little spider plotting and planning a most devious crime that only becomes clear in the last half hour of this film. Audiences should expect to spend the first hour completely confused but it’s a pleasant enough ride and the performances themselves are average to above average with Danielle Macdonald (Patti Cake$) standing out amongst her peers.

The script by Brian DeLeeuw, Nacho Vigalondo, and director Alice Waddington is messy and convoluted, and when you get to the end and the answers are revealed they don’t entirely explain all of the plot points that have a come before it.

However, “Paradise Hills” is lush to look at, beautifully filmed and its message that we all have something to contribute even if it’s not what people want from us is a good one.  Though it could have been expressed in a cleaner way, I appreciated the perspective. Pressures and expectations of young women are not commonly explored in film and more is made of the demands on young men, so it’s nice to see this opening a conversation if nothing else. Tonally flat but visually compelling, “Paradise Hills” ultimately lands somewhere in the middle.