“The Haunting of Hill House” by Shirley Jackson has often been described as the perfect ghost story. Due to all of its acclaim it was inevitable that it would be adapted for the screen, but it must have posed some challenges. For one thing, director Robert Wise opted to shorten the title. There were more complicated matters of subplot that would need to be addressed to make a film from this genuinely scary story. For the most part, Wise succeeded and “The Haunting” (1963) is worthy of its source material. Unfortunately, along the way some of the subtext of the story was muted or cut out altogether. This leaves the audience with questions regarding how mental illness as well as how one character’s sexuality was depicted.

The story has been a standard of high school literature classes for years. However, for those who managed to avoid a few of their past English homework assignments, “The Haunting of Hill House” theorizes that some houses are “born bad” for whatever reason. In the case of Hill House, tragedy struck the family who built it even as they were moving in and things only got worse from there. The now abandoned house is seen by Dr. John Markway (Richard Johnson) as a perfect test case to prove his theories of the existence of the supernatural. The only problem is he needs a few volunteers, preferably with a history of sensitivity to psychic phenomena to stay in the house with him.

He manages to enlist only two women and a distant relation of the original owners. Eleanor (Julie Harris) is a troubled young woman who until recently cared for her infirm mother. Theodora (Claire Bloom) is an artist who prefers to go by the androgynous name Theo. Luke (Russ Tamblyn) is the arrogant nephew who sees the house as a potential financial windfall he stands to inherit. These four would be ghosthunters have only the housekeeper, Mrs. Dudley (Rosalie Crutchley) and her husband as their tenuous connection with the outside world.

Mrs. Dudley makes it clear at any and every opportunity that she will not stay in the house overnight which Eleanor and Theo find amusing, at first. Soon, the little band of psychic researchers find that the house is more than they bargained for. Eleanor seems to be targeted by whatever supernatural forces are at work at Hill House, but it also might be her sanity slowly crumbling away. The director leaves the audience having to answer that for themselves.

Julie Harris bravely transforms her naturally luminous self into frumpy, self-doubting, anxiety ridden Eleanor. A few months after her mother’s death, she is seen by her sister and her family as an unwelcome burden that they grudgingly allow to live with them. Even Eleanor’s young niece seems to delight in taunting her for her nervous ticks and lack of self-esteem. 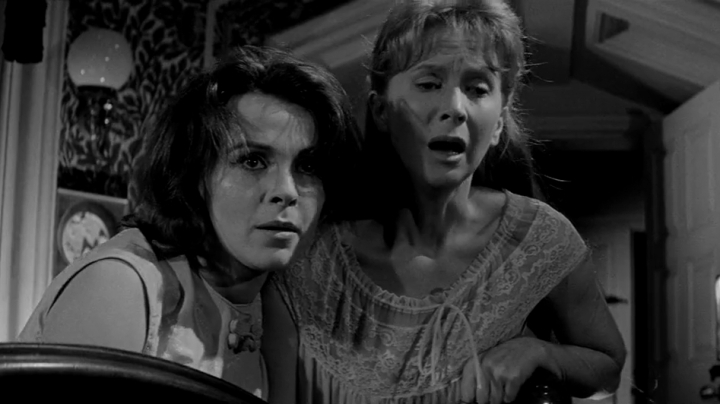 Harris seems to be as immature as her niece in her inability to articulate her desire to use the family car to visit Hill House, even though she is entitled to have it. Eleanor is grappling with her identity now that she is no longer a caregiver as well as grief and lingering resentment for a parent who dominated her life. She sees the invitation to Hill House as a lifeline and clings to it with desperation and painful self-awareness of her lack of social skills.

Eleanor’s joy at the sudden freedom of a drive through the country is rather pathetically shared with the audience through voice overs of her thoughts. These voice overs slowly become more and more terrifying as Eleanor second guesses her experiences at Hill House. At one point she asks herself how her companions can hear the voices she thinks are only in her head. The house quickly shows obvious signs of being haunted that affect everyone inside it, but Eleanor is particularly vulnerable because she has no defenses to fight back.

“The Haunting” has some truly terrifying moments that stand up to the test of time. In addition to all the psychological tension there is a wonderfully rickety spiral staircase, loud banging, crying and other effects that are used just enough to be spooky but not cliché.”

In the 1960’s homosexuality was not depicted in film except in a suggestive way. Theo is only obliquely implied to be gay because a scene near the beginning of the film that showed her arguing with her female lover was cut out. However, there is a devastating confrontation between Theo and Eleanor later on where Eleanor viciously calls her one of “nature’s mistakes.” Claire Bloom’s reaction as she seems to be physically struck and grasps her arms almost in pain is heartrending.

For all her sardonic teasing of Eleanor and even predatory suggestiveness, Theo is a caring person who is secure in her identity as an artist but maybe not so much in her sexuality. The question that remains unanswered is, was it Eleanor who knew just how to hurt Theo or was it the house taking possession of Eleanor and lashing out? By alienating Theo, the house made Eleanor completely cut off from the one companion who could empathize with her as a psychic and a woman.

All the better to claim Eleanor as the next victim of Hill House. Or did Eleanor self destructively cut off a potential friend who had already made it clear that she was only a casual acquaintance and nothing more? The audience is never sure which is the greater danger to Eleanor, the supernatural forces of Hill House or herself.

“The Haunting” has some truly terrifying moments that stand up to the test of time. In addition to all the psychological tension there is a wonderfully rickety spiral staircase, loud banging, crying and other effects that are used just enough to be spooky but not cliché. Director Robert Wise received a Golden Globe nomination and probably would have received an Oscar nomination as well if the Academy wasn’t notoriously disapproving of the horror genre. “The Haunting” is worthy of being included in any horror fan’s annual Halloween must see list.