“Body at Brighton Rock” is a horror film. However, it’s not a very well executed one. There are a lot of jump scares in all the right places: a hand on the shoulder, a loud noise, someone jumps out from the bushes. When well-executed, the jump scare can be very effective. A prime example is in “Jaws”, or in “The Shining”. However, for the case of Body at Brighton Rock, the jump scare is used as a lazy way to keep the viewer awake, rather than actually scaring them. As a result, you walk away from this film feeling deeply unsatisfied.

This isn’t to say that there are a few positive comments to be made. The actual premise of the film is intriguing and has some real potential to be a modern-day fable of sorts (a commentary on the ignorance of the millennial generation), however, the story doesn’t really go anywhere. The main performance by Karina Fontes is very strong, as she does her best with the material she has been provided and she has a strong on-screen presence which is necessary considering she is the main driving force of this film.

The film’s cinematography by Hannah Getz is impressive and manages to capture the natural beauty of the location. And, while the budget is quite low, the film is still visually pleasing with decent make-up and special effects from Josh Russell and Sierra Russell. Regardless of these aspects, they cannot help save a very monotonous and vacuous film from falling flat on its face.

“Body at Brighton Rock” is a horror film. However, it’s not a very well executed one. There are a lot of jump scares in all the right places…However, the jump scare is used as a lazy way to keep the viewer awake, rather than actually scaring them.”

The film’s plot is simple and straightforward. Wendy (Karina Fontes), a part-time summer employee at a mountainous state park, takes on a rough trail assignment at the end of the season. Wendy is determined to prove to her friends that she’s capable of doing her job. However, she ends up taking a wrong turn, only to stumble upon what might be a potential crime scene. Wendy is instructed to stay with the body until help comes in the morning. Granted, that sounds like an excellent premise on paper. The issue is that this could have been such a neat little short film. Instead, the premise is dragged out for 90 excruciating minutes.

When asked about the decisions the main characters make, director Roxanne Benjamin has gone on the record to state that every decision mirrored one she made whilst she worked in the wilderness herself. However, I am personally unsure whether this is truly the case as the character of Wendy doesn’t exactly react in the way a person would in that type of situation. She breaks her only form of communication, deliberately cross contaminates a possible crime scene and alert attention to themselves from a possible murderer (played by Casey Adams). By some miracle, Wendy manages to survive mishap after mishap by sheer luck, and after a while, it becomes exhausting watching this all unfold on screen.

“Horror is more than just loud noises and dead bodies. Good horror will leave the audience shaking in their seats…If you are looking for a film that gives you this kind of experience, then it is safe to say that “Body at Brighton Rock” is not this film.” 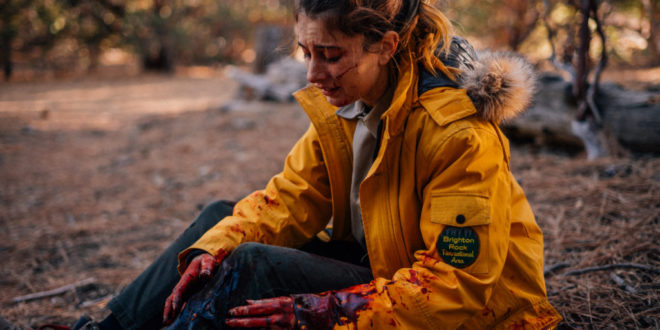 In an interview, Benjamin stated how she drew inspiration from films such as “Cast Away” and “All is Lost”. Both are very fine films, the main character is mostly alone and must survive terrible feats – whether it be the case of being marooned on a desert island or facing a storm. The issue here is that the character of Wendy must simply survive one night in the wild with a dead body. The stakes are simply not high enough as we know that she will be rescued. The fact that the characters in Cast Away and All is Lost are in situations that are out of their control, which means that we are fully invested in their tales of survival.

Author’s note: this review was originally published on Filmotomy