As part of their Huluween celebration, Hulu released “Little Monsters” (written and directed by Abe Forsythe) on October 11, 2019. The comedic zombie-horror flick comes just in time for spooky season and boasts a star-studded cast including Lupita Nyong’o (“Us”, “12 Years a Slave”, “Black Panther”) and Josh Gad (“Frozen”, “Beauty and the Beast”). Even with so many of the right ingredients, “Little Monsters” doesn’t follow through. Many of the jokes fall flat and the one-note characters make the film drag even though it’s just over ninety minutes long. 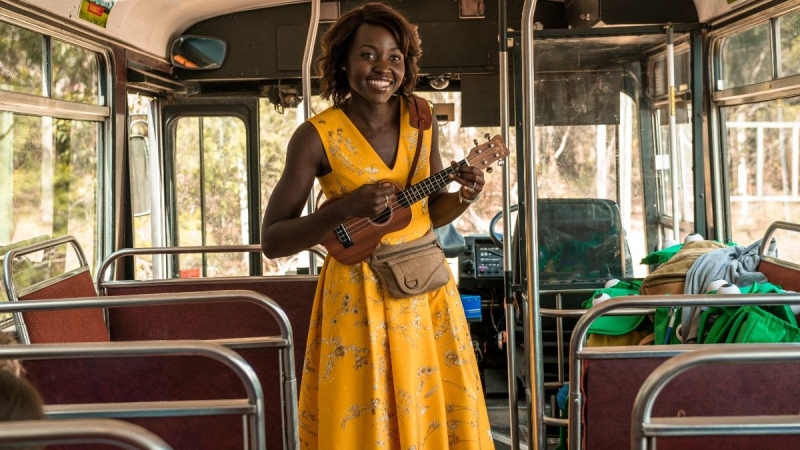 “Little Monsters” takes place during a class field trip to a nearby farm. The chaperones are the kindergarten class’ teacher, Miss Caroline a.k.a. Audrey (Lupita Nyong’o) and Dave (Alexander England), the uncle of Felix (Diesel La Torraca), one of the students. The trip begins normally enough, with Miss Caroline playing her ukulele rendition of Taylor Swift’s “Shake It Off” on the bus. Dave is taken with Miss Caroline and reveals that he’s also a musician. What he doesn’t reveal, though, is that his career tanked. He’s in a rough spot and staying with Felix’s family. He only goes on the trip because he’s attracted to Miss Caroline.

When the group arrives at the farm, things get messy. Zombies have overtaken the entire area, turning the light-hearted field trip into a full-on survival mission. On the farm, the class adds Teddy McGiggle (Josh Gad) to their group. Teddy is a goofy children’s television show host, a perfect role for Gad, who has worked on Broadway and voiced the character of Olaf in “Frozen.” The kids adore him, but the zombie outbreak brings out his ugly side. Miss Caroline and Dave fight to save the students and convince Teddy to help them. And, of course, the two fall in love by the end of the fight against the flesh-hungry undead.

The premise has the makings of a romp, but “Little Monsters” does not succeed. As the characters are set up in the first half of the film, things look like they could get interesting, but it never pays off. Miss Caroline is established as a beloved teacher who truly cares about her students. She does everything in power to make sure each child has a good time and plays them songs to keep them entertained. Her ukulele songs are sweet at first, but by the third time “Shake It Off” is plucked, it’s hard to not feel a tinge of annoyance. It’s meant to come off as a joke, but it doesn’t land.

One spark of joy in all the mess, though, is Felix, the charming little boy who wants to help save his classmates. Pictured above in his Darth Vader costume, Felix goes off to fight the zombies in an adorable-turned-terrifying scene that leaves Miss Caroline’s bright yellow dress with splotches of blood. Felix and the other kids are the best part of the movie, but “Little Monsters” seems more concerned with Miss Caroline and Dave, casting off the kids’ characters to the side.

Because the story centers Miss Caroline and Dave, they fall in love by the end as most leading men and women do. The story doesn’t need the love story, though. Their romance feels forced, even bordering on problematic because Dave has spent the whole trip lying to her about who he is, telling her that he’s a successful musician and a Christian when he’s actually a failed musician who was previously in a heavy metal band with songs full of anti-Christianity lyrics. So, their relationship was built on lies and fundamentally does not make sense given that Miss Caroline is engaged. It’s not important to the overall story. Instead, it feels like it was added in for emotional depth even though “Little Monsters” needed work in other places, not in the relationship department. The film could have done much better with a funnier script and more focus given to the children, but it comes up short as a forgettable and disappointing attempt at a zombie comedy.