With a fun sense of wit that stems from a strong leading performance from Tsai Chin, writer/director Sasie Sealy crafts a great feature debut with a healthy mix of dark comedy and crime drama.

The film follows Grandma Wong (Chin), a mean-spirited, chain-smoking Chinese grandmother who lives within New York City’s Chinatown. After a meeting with a local fortune teller (Wai Ching Ho) who tells Wong that she has good fortune coming her way, she travels to the casino to bet the last amount of money her husband has left her after he passed. While things go well at first as Wong starts to rack up a fortune, she eventually loses it all on a bad bet. Feeling rotten about losing it all, Wong’s luck quickly turns around when a bag full of money lands in her lap. However, this money has a lot of baggage that goes with it that lands Wong in the middle of a gang war that could put her and her family in danger.

“With a fun sense of wit that stems from a strong leading performance from Tsai Chin, writer/director Sasie Sealy crafts a great feature debut.”

With Wong, even for her rude attitude, she has towards everyone and the bitter scowl that’s generally on her face throughout the film, she’s oddly likeable still because of how she starts to open up to those around her. Honestly, Wong’s mean-spirit is one of the things that makes “Lucky Grandma” a good dramedy and it stems directly from Chin’s performance. The way she carries herself against the cartoonish criminals that constantly bother her after she “gains” the money is incredibly strong and seeing how Big Pong (Hsiao-Yuan Ha), a bodyguard she obtains from a local gang, eventually grows on her is very sweet. It’s these two to Wong that are excellently brought out through Chin’s great performance and are what make Wong such a great leading character. Not to mention, she has an arc that I really enjoyed and it’s what makes the ending so satisfying.

Ha’s performance is also a lot of fun and the second that Big Pong enters the picture; I knew I was instantly going to like him. In most movies, Pong is the kind of character whose big presence would be used as comic relief and he would barely get any moments, or even lines, to be given a personality. Thankfully, that’s not what happens here as Sealy and co-writer Angela Cheng allows him to grow as a character and let Ha deliver a strong performance. Don’t get me wrong, it’s still funny to see how enormous he is in comparison to Wong, but it’s not the only thing about him that’s funny and endearing. There’re some great exchanges between him and Wong that will make you laugh, and he definitely proves to be no slouch in the bodyguard department when things become a little more action-oriented.

“Lucky Grandma” hits the right beats to please most, if not all, viewers and is a dramedy that’s elevated from the film’s two strong performances.” 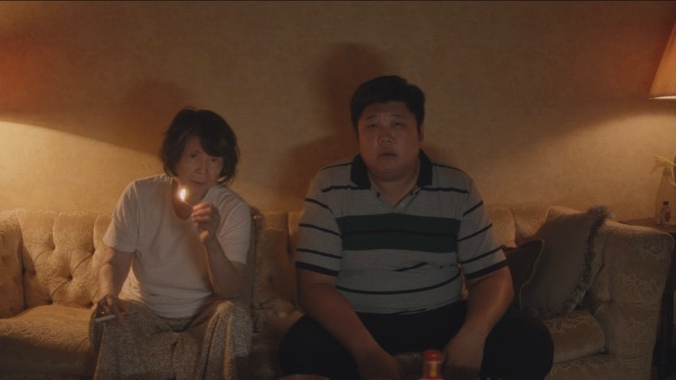 Admittedly, not all of the humour and action lands with all of the characters and most of the other side characters aren’t on the same level as Wong and Pong. The cartoony criminals, while funny at first, lose their lustre a little quickly and even while Wong’s grandson David (Mason Yam) has an interesting arc and a funny video sequence that’s made better through Wong and Pong’s reactions, he’s one of the only side characters that make a strong impression. The kind of characters like Sister Fong (Yan Xi) have been seen in other films and they don’t necessarily add anything special to the film. Even some of the action scenes don’t land a strong punch and could’ve used some stronger sound effects and choreography.

I will say that Sealy is strong behind the camera with some great shots that capture the tight environment space well. There’s actually a great scene where Wong is trying to get the best of criminals that have broken into her house and Sealy captures a good chunk of the action in one singular frame. It’s moments like these that make “Lucky Grandma” a strong feature debut for Sealy and like I said before, she definitely knows how to create connective and fun characters.

Even for its shortcomings, “Lucky Grandma” hits the right beats to please most, if not all, viewers and is a dramedy that’s elevated from the film’s two strong performances. It’s simple in its premise and execution but has some unique elements to it that elevate it past being an ordinary dramedy.