Laure de Clermont-Tonnerre brings us a film about a convict who’s offered the opportunity to enter a rehabilitation program to train wild horses. Based on true events this film focuses on the capturing and training of wild horses. These horses are captured from their natural habitat, as a form of population control, and are taken to prisons where they are trained to later be auctioned or sold to local ranchers and/or police officers.

“The originality of “The Mustang” resonates deeply amid a spate of biopic films. Director Laure de Clarmont-Tonnerre brilliantly directs both humans and horses in a visually stunning film.”

“The Mustang” is a moving, heartbreaking and touching movie with phenomenal acting and a memorable story. The story is original and to my surprise, it’s based on true events. I wasn’t aware that some facilities offered these types of rehabilitation programs including here in California. The movie was filmed in Nevada, a state that also offers this type of rehabilitation program.

Matthias Schoenaerts is the highlight of this movie alongside the horse, who did an excellent job too. Being an actor isn’t easy but I can only imagine what it’s like to act beside a horse (or any animal in that case). Matthias’s portrayal of Roman, a convict who’s struggling with anger management issues, is captivating and genuine. This may be a long shot but don’t be surprised if he gets some buzz for his portrayal of Roman. He’s been sentenced for several years after leaving his domestic partner with a severe brain injury. Roman, who has been released from isolation, must participate in a rehabilitation program, as a form of him integrating back into society.

Ironically we’re introduced to Roman and Marquis (the horse) in the same manner. Marquis is captured from the wild and is isolated since it’s considered too wild for humans to be near him. Initially, Roman is instructed to clean the horse’s faeces and dispose of it. After being drawn to the commotion of Marquis trying to break free from the trailer, Roman decides to walk over to the trailer where they both have an intense moment. 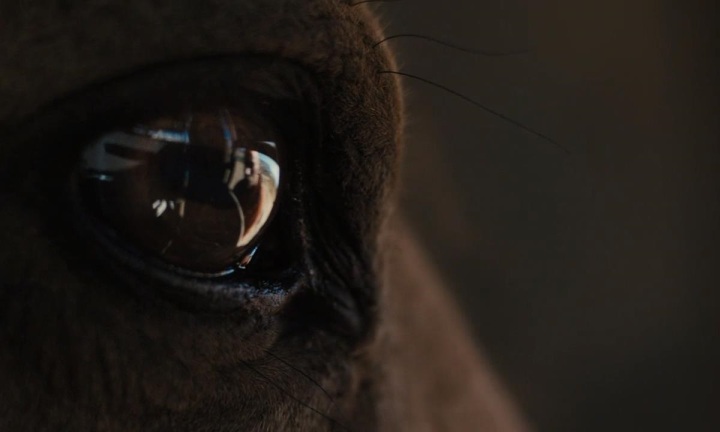 There’s a side story pertaining to Roman’s daughter, who is the only family member that visits him. Their relationship isn’t ideal as Roman constantly yells at her to never visit him again. Eventually, Roman is assigned to train Marquis. Initially, Marquis is too wild for Roman to train to lead to a physical altercation between the convict and the horse. No, the horse doesn’t harm Roman, it’s Roman who loses his patience and hits the horse. The character development is masterfully done such that the audience may feel empathy towards Roman even after learning the crime he committed. The evolving relationship between Marquis and Roman is the heartbeat of this movie. The ending is perfect!

“[Their] connection is so wondrous and quietly powerful… This is lovely.”

[Please note that at the time of writing, “The Mustang” has not be released on DVD or via VOD in the UK]