We are just a couple of months away from the beginning of the end. The Canadian comedy, “Schitt’s Creek” became a hit thanks to the audience Netflix brought. If you have not watched the show yet, now is the time to get started.

The show follows the Rose family. Johnny (Eugene Levy) is the patriarch of the family. He obtained his wealth through video stores. Moira (Catherine O’Hara) is the matriarch, who starred on notable soap operas and is a C-list actress. Their children David (Daniel Levy – and Eugene’s own son) and Alexis (Annie Murphy) have never worked a day in their lives. One day, it is learned that the Rose family has lost everything after being defrauded by their business manager. But they do have one asset (no, Moira, not the children) – a small town called Schitt’s Creek that Johnny bought.

“What makes “Schitt’s Creek” so lovely is how it never sacrifices its characters’ development for the story.”

The family has to move to this po-dunk town and into the local motel owned by Stevie Bud (Emily Hampshire), a gruff exterior woman with a soft center. The town is populated by a host of characters such as the mayor Roland Schitt (Chris Elliott) and his wife Jocelyn (Jenn Robertson), local café waitress Twyla (Sarah Levy – Eugene’s daughter), the veterinarian Ted (Dustin Milligan), and David’s future business-partner Patrick (Noah Reid).

What starts off as a show about pretty despicable, out-of-touch people just trying to get out of this small town turns into a great story of self-discovery, reinvention, and a little bit of redemption. What makes “Schitt’s Creek” so lovely is how it never sacrifices its characters’ development for the story. It allows each person to grow in certain ways without diminishing the other areas of growth of that character or other characters.

Johnny learns to grow as a man, learning to understand that making money is not the only way to provide for your family. Moira grows more as a mother, finding glimpses of a maternal instinct she tried pawning off on nannies. David grows into himself, allowing himself to be open to love both through his friendship with Stevie and his later relationship with Patrick. And the person with the most growth – in my opinion – is Alexis. The former short-lived reality TV star and globetrotter, Alexis furthers her education, furthers her understanding of empathy, and really learns to value herself as a person. While the entire cast is phenomenal, the work that Murphy has done as Alexis is truly inspiring. It gives hope to the idea that you can learn to be a better person, and that your mistakes in the past might just help you build a firmer base for the future.

“With a show as tender and loving as “Schitt’s Creek,” it is unfathomable what television will be like once its monumental presence has left our screens for good. But as we prepare to watch the final season, rewatching the trials and triumphs of our favorite Canadians will be the best way to send off this remarkable cast of characters.”

Dan Levy has also made the town of Schitt’s Creek a place free from hot-button politics. David is openly queer (described in the beginning as pansexual) from the get-go. Even with perceived “small minded” folks, sexual orientation discrimination is not part of our world here. And it is nice to have a silver of the universe be so open and understanding and loving. When Patrick later informs his parents that he fell in love with David, they are relieved and express the ultimate gratitude for their son sharing his truth and his love with another person. That is a far cry from Ricky Vasquez of the 1990s. 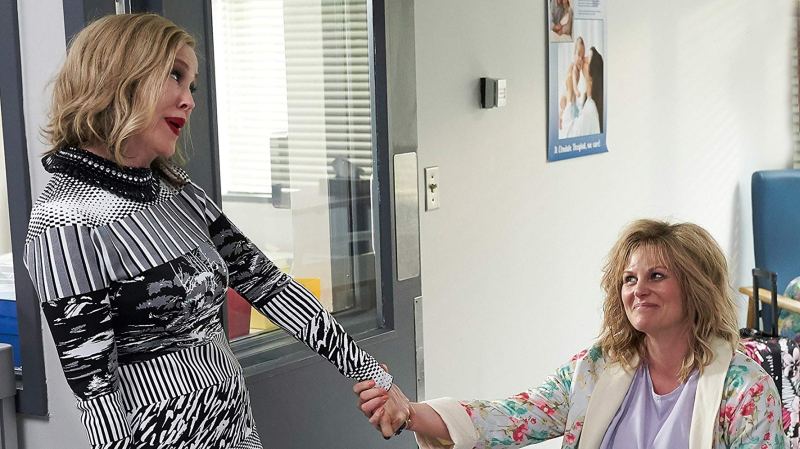 With a show as tender and loving as “Schitt’s Creek,” it is unfathomable what television will be like once its monumental presence has left our screens for good. But as we prepare to watch the final season, rewatching the trials and triumphs of our favorite Canadians will be the best way to send off this remarkable cast of characters. The joy and humility and humanity and love (have I mentioned love enough here) the show brings is never ending, even when the curtains close. Now is the time to still let the magic of “Schitt’s Creek” overwhelm you with the sense of wonder and hilarity before it completely wraps up.