Sometimes you see a film that encapsulates something so enraging and freeing and vindicating it’s like a punch in the face and you want to run up to your fellow cinemagoers and shout “wasn’t that amazing!!”

“Judy and Punch” (2019) is one such film. It’s darkly funny and a rallying call to a radical revolution of open-mindedness and inclusivity. These things are not the realm of wishy-washy millennial snowflakes as social media trolls would have us believe, but strong people willing to risk their lives standing up to tyranny and braying mobs who are choosing which rocks to stone them to death with.

“Judy and Punch” is the directorial debut of Mirrah Foulkes who you may have seen in acting “Animal Kingdom” (2010) or “Top of the Lake” (2013). It was shown as part of the World Cinema Dramatic Competition section at Sundance Film Festival 2019 and was the “Dare” strand gala screening at the London Film Festival 2019.

Judy (Mia Wasikowska) is the skill behind a husband-and-wife puppet show while her husband Punch (Damon Herriman) is a violent alcoholic with an inflated sense of his own potential.

“Judy and Punch” (2019) is one such film. It’s darkly funny and a rallying call to a radical revolution of open-mindedness and inclusivity.”

Punch is an abuser and manipulator, being both physically and verbally violent towards not only Judy but others around him. The puppet show they perform becomes increasingly “smashy” in Punch’s quest for glory, foreshadowing what’s to come.

After a drinking session, a terrible fate befalls their infant daughter. Punch then beats Judy mercilessly in a blind rage. She is discarded and left for dead but begins to recover with the help of a group of heretic misfits (note: mainly women and those who are physically different).

Judy now has to choose between an outcast life of relative safety and a revengeful restoration of justice.

“Judy and Punch” is based in the mid 17th century but not really anchored to any specific time. It’s set in the mythical town of Seaside in England but we hear a range of accents and there is no sea. So without an exact time and place, this film becomes somewhat universal.

The music is also somewhere outside of time. The score by François Tétaz mixes orchestral instruments with abstract sounds and what I’m going to describe as ‘choral hard shouts’ to create something beautiful, ominous and rather abstract. There are also moments of synth which lifts the film out of whatever time it’s based in and into another realm entirely.

“Happy stoning day! We were wondering perhaps if you’d do us the honour of casting the first stone.”

The film as a whole is very violent and at times a little gory. It is quite a tough watch because it’s not glossy fake Hollywood violence, it’s dirty and gritty and inflicted upon people who can’t defend themselves.

But that’s the point. Abusers get away with their abuse and are enabled by those around them. It’s not glossy, it’s everywhere and it’s literally passed on to children.

“The music is also somewhere outside of time. The score by François Tétaz mixes orchestral instruments with abstract sounds and what I’m going to describe as ‘choral hard shouts’ to create something beautiful.”

When the mob was braying for a hanging or a stoning they made me think of people piling on someone’s misfortune, desperate to point out “they’re the witch, not me!”

The town’s willingness to vilify victims and believe the words of an abuser was like our modern press writing endless articles titled “Honest hardworking pillar of the community’s career in tatters from murder charge”. 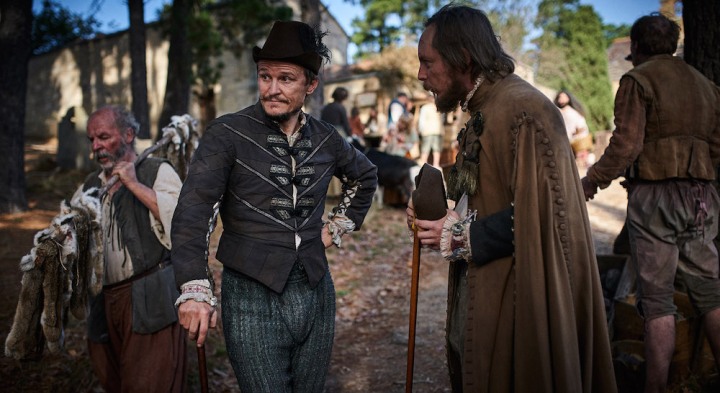 The script has some very darkly funny satirical moments, most often from the characters of the village. The sweet and ineffective police constable who flaps about trying to encourage the use of reason for example. Or the public-killing coordinator who mimics dissenters in a high pitched voice “stop stoning women” as though it was a ridiculous request. He’s the guy on Twitter who calls people “PC brigade SJW virtue signallers” for campaigning against blatant injustices.

The messages about gender-based violence, women’s refuges and mob mentality are very clear. But, while obvious, these themes are presented in an incredibly unique way. It’s not a lecture it’s a live demonstration.

It’s tempting to write a thousand more words about the pith perfect tone, gender non-conforming characters, and the enduring nature of gendered violence, but I’ll end with a note about breastfeeding.

Breastfeeding is shown on screen in a real and natural way. This is an act that has been performed frequently by millions of people around the entire world for the whole of human history. But I can’t recall ever having seen it on the big screen before without being sexualised or ridiculed.

“The messages about gender-based violence, women’s refuges and mob mentality are very clear. But, while obvious, these themes are presented in an incredibly unique way.”

That scene and its normalisation of breastfeeding made me wonder what else we’re missing out on because we don’t have enough female directors.

“Judy and Punch” is very dark, very funny and very fresh. It’s a fable that might be hard to swallow but despite being set hundreds of years ago it’s absolutely true today. If this is an uprising it’s one I want to be part of.

3 thoughts on “Review: Judy and Punch”