There is a strangeness to “Knives and Skin” (2019) that makes it difficult to put into words precisely what it’s about and how it made me feel. Jennifer Reeder’s film is eerie, bright but dark, funny but upsetting. It puts you on edge but also has you really feeling for the people on screen. If you like films by Peter Strickland or David Lynch you’ll love it. If not, I recommend pushing your cinematic comfort zone.

Fifteen year old Carolyn Harper (Raven Whitley) has an encounter with sexually aggressive Andy (Ty Olwin) which ends badly. She goes missing and the town is shaken. Her mother Lisa (Marika Engelhardt) slowly loses her mind but others in the community have just as tenuous a grip on reality.

The town forms search parties and puts up (apparently expensive) posters, or sniffs people and objects in an effort to find Carolyn. As the narrative unfolds we’re not sure whether they’ll actually find Carolyn (who keeps moving), or whether that’s even the point.

The most striking thing about “Knives and Skin” is a sense of eeriness. The way the characters speak is strange, what they wear is outlandish and their actions don’t entirely make sense. It’s close enough to normality to make the edge of strangeness feel uncanny.

For example, there’s a bowl of human teeth in Carolyn’s bedroom. I could perhaps understand if they were baby teeth but they’re adult ones. The dialogue isn’t quite like anything we’d expect to hear. The high school kids speak in slightly convoluted ways and on a few occasions they answer in perfect unison like a homogenous group.

The instructions for the search party involve a convoluted and bizarre series of terms they need to shout in different scenarios. This is the strange world the film represents. It’s like ours. But odd.

The townsfolk are also very much into creative crafting. One mother spends hours creating glitter-laden posters and signs. One girl attaches the names of feminist icons to her clothing in big letters – which actually seems like a fabulous idea to me.

This creativity is most evident in the outfits of some of the high school classmates. Hugely stylised, meticulously created costumes and bold makeup are worn each day without comment from the rest of the school. Others at the school remain in their various pristine uniforms all day, from cheerleaders to the marching band and the beaver mascot. It makes the characters into avatars of what they represent.

While some characters’ costumes get more elaborate and outlandish, guilt-ridden Andy’s head continues to bleed for days after his encounter with Carolyn. His bandage is increasingly soaked with blood like a beacon pointing out what he’s done. But because nothing is quite how we’d expect in this film he leaves it there for all to see and it’s barely commented on.

It seems that the families in this film are more like tangled webs of relationships than clearly defined units. One of the most touching relationships in the web is between two cheerleaders. This is a tender loving relationship rather than being bold and larger than life. They touch each other’s hands gently and carefully in contrast to the sloppy meatloaf kneading scene from earlier in the film.

It’s very tactile and we can almost feel the textures of the objects they pass to each other in secret as we wonder just how they were able to smuggle such ornaments in their underwear.

The use of colour is incredibly striking and unreal. Bright neons bathe many scenes where such colours shouldn’t exist. The only scenes with natural lighting are flashbacks of Carolyn before everything started to go wrong.

“I wrote a new cheer. It’s called ‘I’m more worried than I let on’”

Everyone in “Knives and Skin” has something disturbing they want to hide and everyone is lonely. There’s no end to the list of people in authority who want to buy used underwear or drugs and it’s not shocking that anyone’s selling it. They all want to escape their lives and we are left with a sense of melancholy for them. 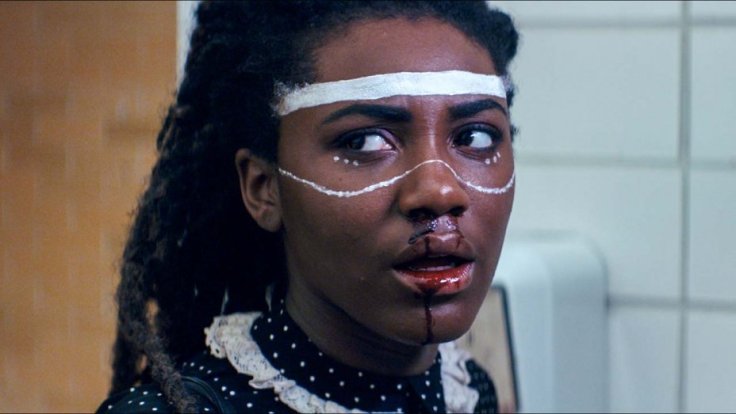 This film is fairly disturbing in its surrealism. At times I felt incredibly uncomfortable and admit I did exclaim “oh my god what is happening!” out loud a number of times.

But it’s also very darkly funny and has strong feminist undertones. It has a diverse cast in terms of race, gender and sexuality, and the way one girl’s hijab is incorporated into her costume is a work of genius.

“Knives and Skin” is a great lesson in surrealism and cinematic techniques. Despite how uncomfortable it made me feel at the time, the more I sit with the film on my mind the more stars I want to give it.

KNIVES AND SKIN in theaters and available on VOD and Digital HD on December 6, 2019.