A young woman arrives in an idyllic poolside estate overlooking the desert with her wealthy, older boyfriend. She is scantily clad and coquettish–working a lollipop in quite the lasciviously suggestive way. What seems like a hedonist fantasy at first (an older, wealthy, married man all alone in a beautiful house with a young sexy woman and a weekend filled with their vices of choice: drugs, alcohol, sex) gets upended when Richard’s (Kevin Janssens) sketchy pals, Stan (Vincent Colombe) and Dimitri (Guillaume Bouchède) arrive unannounced. This sticky situation is further aggravated when, during a night of partying, Jen (Matilda Lutz) proceeds to drunkenly flirt with them all.

Jen’s naive flirtation is, I suppose, meant to convey how young, inexperienced, and unbothered by the ugliness of the world Jen is. This is a dangerous game Jen is unknowingly playing, and all the while, we in the audience are two seconds away from yelling at the screen and telling her to get the hell out of there. Our fear for Jen is compounded even further when we realize this film was released back in 2018–right in the midst of the #MeToo and #TimesUp movements–which have inspired so many women to speak up about their experiences of sexual harassment and assault. Jen–like all women, is someone’s daughter/sister– thus, the premise of this film may perhaps be too difficult for some to stomach.

“Revenge is bloody, disturbing, tense, and highly stylized. French horror is so exciting right now and I can’t wait to see more from Coralie Fargeat.”

The idea of telling a story about rape–as with this film–may be too much to explore cinematically, as it is emotionally complex, disturbing territory (writer/director Coralie Fargeat makes her stunning feature debut with “Revenge”; a rape-revenge fantasy that’s equal part stomach-turning and thrilling). The night after the party, Jen is raped by the disgusting fat fuck, Stan while Dimitri walks in and almost nonchalantly looks upon it like it’s nothing. This is an assault which Fargeat does not fetishize or linger on for a gratuitous amount of time. Richard returns after two hours and learns of Jen’s violation; at first he seems infuriated.

We then realize, shortly after, that his anger stems from the hassle that keeping a victim’s mouth shut entails…So he sides with his friends, and pushes Jen off a cliff in hopes of killing her. Jen lands on an upward-facing tree branch and is skewered. Fargeat goes to town on the gore as Jen embarks on an adrenaline-fueled quest to exact her revenge. 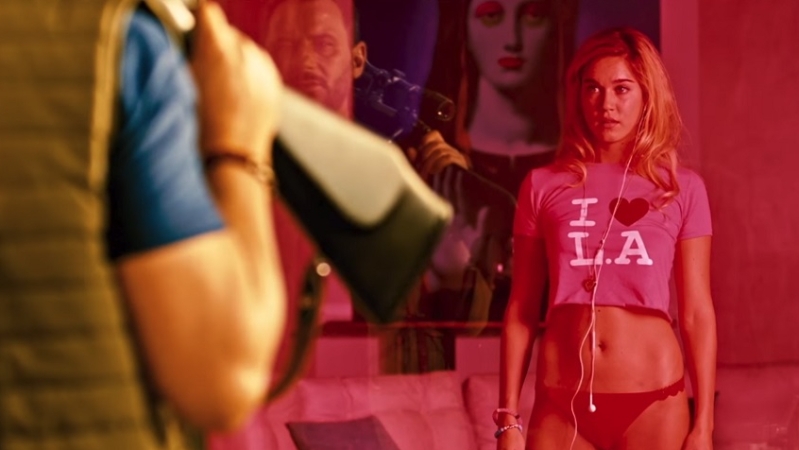 As I’ve said before, Fargeat doesn’t linger on the rape in ways that are sexy or exploitative; she shows just enough to get your stomach turning. Her interest lies in how she depicts the disgusting sub-category of toxic masculinity: entitlement–the same entitlement that suggests that a scantily clad woman is “asking for it” with how she dresses.

“Jen is a revenge heroine for the ages. Smart, resourceful, and determined to show those bros just how wrong they were to underestimate her.”

Revenge presents a slight, yet not entirely satisfying, subversion of the male gaze. Fargeat’s color grading of the desert matches Jen’s personality and vibe at the beginning of the film–highly saturated, bright, over-exposed, and candy colored–almost like her magenta lollipop. Jen herself looks like a piece of eye candy; Ricahrd’s friends certainly see her as as such, and the camera shoots her in such a way which reinforces that–crawling up her body in ways which feel entirely gratuitous.

Ultimately her character transforms into the desert itself: hot, harsh, fierce, and dangerous–Jen turns into an absolute force of nature by the end of the film. Lutz turns in a performance which depicts her understanding of Jen; in how she is able to navigate the persona of a wronged woman who chooses fight over flight and strives to get even.

“Matilda Lutz is clearly a stand-out in an exciting twist on a well-worn genre.”

The shift in color toward the later part of the film is noticeable, and presumably meant to convey Jen’s rebirth into someone darker; someone made privy to the darkness this world has in it. Predator becomes prey; prey becomes predator–the score is amplified, and the desert is rendered less idyllic and more dangerous. Unfortunately–solid as this action film is, most of the titillating gore happens at the expense of Jen herself; the men she exacts her revenge on don’t suffer nearly as much as her. That, coupled with the fact that Fargeat, I feel, does not convincingly portray Jen as a female protagonist completely free of the male gaze. Even after she has come into her own, the camera doesn’t hesitate to constantly remind us of just how short her shorts are; how much of her midriff is exposed; how tight her outfit is…She is shot in angles which seem to be from the point of view of a child and/or invisible midget (none of which appear in the film).