“When you’re underwater for months at a time, you lose all sense of day and night.” Kristen Stewart laments in voice-over as the film opens up; a hint at the potentially Lovecraftian elements to follow. Lovecraftian horror, (a subgenre of fictional horror which *checks notes* places an emphasis of cosmic horror of the unknown or unknowable–with big, giant creatures!), certainly puts the vampires and werewolves  Stewart faced in “Twilight” to shame.

Admittedly, the thought of Stewart going face-to-face with an enormous aquatic monster–while ruminating on loneliness, the unknowable, the concept of nature getting revenge on man–is ripe for potential. However, all this potential is completely wasted. Instead, we’re left with scavenged bits and pieces of other sci-fi/horror films, stitched together by a completely clueless studio (this was in development hell since it finished shooting in 2017) into a hellish, soulless, Frankenstein-ed monster of lazy, corporate by-the-numbers guck. “Underwater” is a godforsaken pastiche of Alien, Aliens, The Descent, Gravity, 47 Meters Down, Sanctum (the list goes on… not one single element here is not borrowed)… all of which, let’s establish, are far better than this pile of yawns and missed opportunities.

Kristen Stewart plays Ellen Rip…err, I mean Norah Something, an engineer living several miles beneath the ocean’s surface. We first see her in a commons bathroom, helping a spider out of a strenuous situation. Perhaps this is meant to foreshadow her benevolence and selflessness and; perhaps–I thought–we’d get to learn a tad bit about both her and what the purpose of this deep-sea mission is… two seconds later, however, it is revealed that the people behind the film (writers: Brian Duffield & Adam Cozad; director: William Eubank) were like: “let’s skip the entire first act–the world-building, the setup for the characters and context of the story, basically everything a first act needs!–and go straight to the GOOD STUFF!”

“Underwater” is a godforsaken pastiche of Alien, Aliens, The Descent, Gravity, 47 Meters Down, Sanctum (the list goes on… not one single element here is not borrowed)…

So, an accident of catastrophic proportions happens and Norah, along with her crew (Jessica Henwick, Mamoudou Athie, John Gallagher Jr., T.J. Miller) and their captain (Vincent Cassel), realize they must journey–by foot–to an abandoned outpost that may or may not have escape pods for all of them. And so the journey by foot begins! And then it goes on, and on, and on…I am not exaggerating when I say that *at least* seventy percent of this film is them walking and getting stressed over their gradually depleting oxygen supply. At a point–well into the film’s obscenely protracted second act–they capture a mysterious creature that’s been chomping on a human corpse (10 points to you if you can spot which other little critter this one could potentially be a cousin of!).

They are (very late into the film) then hunted down by slimy, flesh-eating creatures (think the aliens from “X-Men: Dark Phoenix”, but with webbed hands and feet)–similar to the Alien films (which this tries so desperately to imitate), they get hunted down one by one. Unfortunately, the picture is so dark, you rarely ever know what is actually happening, or what anyone is doing (imagine shooting a film with an opaque camera lens–that’s what this looks like). 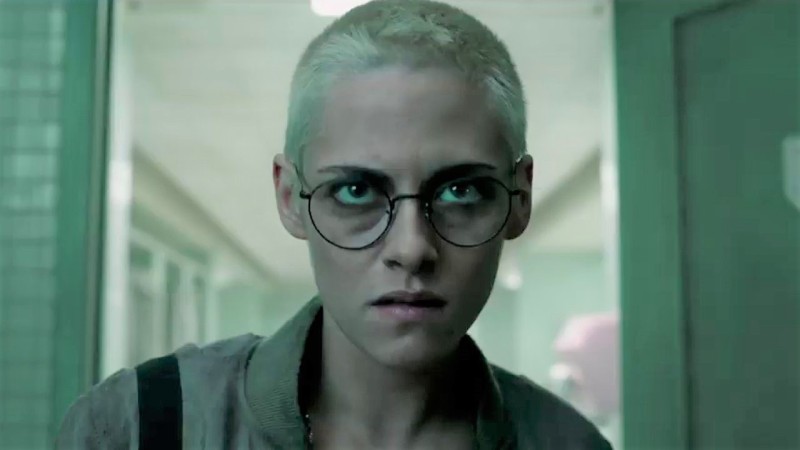 There’s nothing wrong with being coy about the monster your protagonists are up against. But you must ensure that there are some other interesting things going. If you’re going to forego any and all forms of human drama (it’s embarrassing what this film thinks passes for that), at least have a running theme with metaphors about humanity and its impact on the natural world–and conversely, how the natural world answers back. What we have here is something that thinks it’s doing the latter–“We did this!” a marine biologist wails. “We took too much! We’re not supposed to be down here!”; but we’re given no evidence of this–what exactly have *you* done? What exactly have *you* taken?

This thing also fails at making us care about what dominates the screen: people, shot mostly in-closeups, who might as well have been made of cardboard.

I’m all for a movie wanting to focus entirely on “coolness” of the monsters on display. But for this work, it’d have to be–and this may sound like a completely novel idea!–about the monsters. Perhaps show us the threat this monster and its spawns pose to humanity? But this movie doesn’t even give us that–it’s anticlimactic and rushed finale is devoid of any fun, suspense, or palpable dread. It is a complete and utter watery mess that doesn’t offer up nearly enough creature carnage to support its already truncated run time. 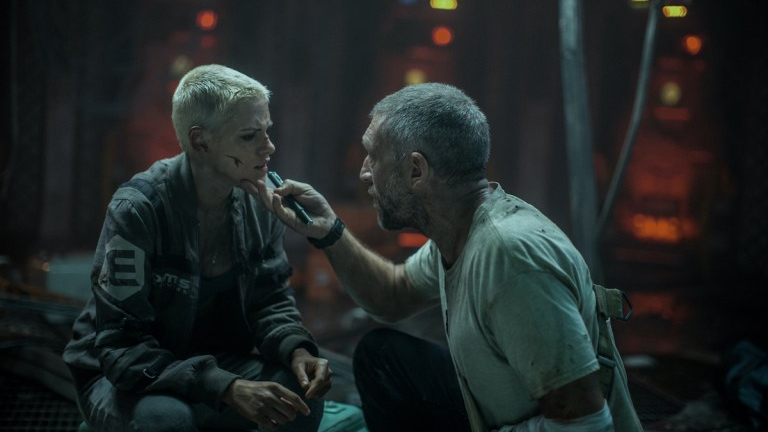 This thing also fails at making us care about what dominates the screen: people, shot mostly in-closeups, who might as well have been made of cardboard. Here we have a film where random characters (I dare you to try and remember any of their names) yell things like “I must go” and “You need to make it back up there” and “I’ll go last!” whenever they’re confronted with danger–yet, we have no appreciation for the “motivations” behind any of these noble acts.

In the end, you have a product which feels unfinished; the lack of dialogue makes it look almost like a series of stock footage stitched together for the sole purpose of creating something that resembles a serviceable movie (it doesn’t). The Lovecraftian breadcrumbs (presumably thrown in during post-production; blink and you’ll miss ‘em!) do nothing to help this godforsaken thing. When you gaze into this water abyss; the abyss yawns back.