“Mr. Jones” tells the story of a young Welsh journalist named Gareth Jones who uncovered the truth of the Holodomor, a man-made famine in the Ukraine in the early 1930s. It is a socio-political thriller as Jones (James Norton) pursues the story despite threats to his own safety. Written by first-time screenwriter Andrea Chalupa and directed by Polish director Agnieszka Holland, the film stumbles along the way but is held up by great performances and a story that needs to be told.

Jones has returned from interviewing Hitler in Germany and warns Lloyd George and his advisors against underestimating the threat he poses. After being fired from his job as a foreign advisor, he decides to go to Moscow on his own to interview Stalin. When he arrives there, he discovers that a friend and fellow journalist has just been killed, likely by the Soviet government because of the piece he was working on. Jones takes up his friend’s work as part of his determination to figure out how the Soviet government is spending so much money when they supposedly have so little.

The Holodomor was a famine in the Ukraine from 1932 to 1933 that is still debated today. Between three and twelve million Ukranians are believed to have perished as the Soviets sent their food supply back to Russia. Some scholars today still refuse to classify it as a genocide, though sixteen countries recognize it as such. The best part of “Mr. Jones” is Jones’s trek through the Ukranian countryside as he documents the suffering he encounters. The section has little dialogue, relying on some stunning visuals and Norton’s non-verbal acting, as Jones encounters starving children and corpses in the streets. It shows the unspeakable things that people do out of hunger and can be difficult to watch.

Norton carries the film as the dedicated journalist, driven to great lengths to find “the one truth.” Viewers may have seen him recently as John Brooke in “Little Women” (2019) and he has the same earnestness and ability to portray emotion in this film. He seems to handle the Russian in the film well.

Vanessa Kirby plays Ada, an English journalist working in Moscow. Ada is aloof, but is intrigued by Jones and ends up helping him. Kirby plays the role well, making the most of her scenes, and is incredibly expressive with her eyes. 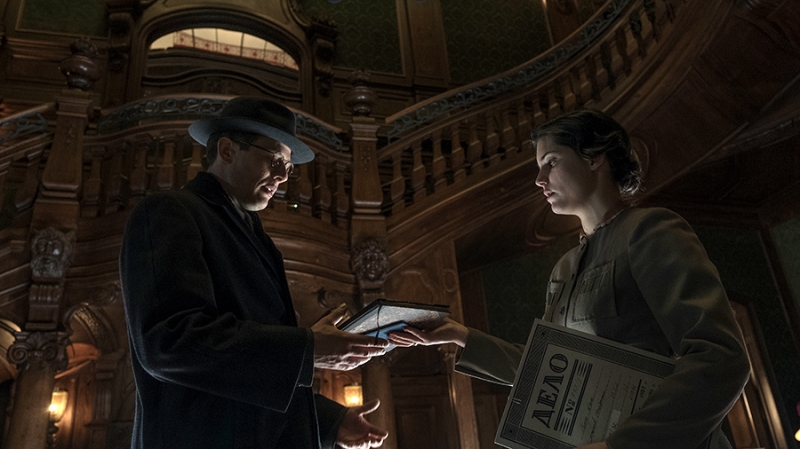 The one truly perplexing part of the film is the inclusion of George Orwell as a character. The film opens with Orwell writing “Animal Farm.” It returns to him writing the story several times and there is a scene in which he meets Jones over lunch. Orwell was influenced by Jones’s reporting, but it felt like these scenes took us out of a more urgent story.

“Mr Jones” has a very dark, bleak aesthetic that feels appropriate to a film about such a serious subject matter. Much of the film is grey in color and there’s a poignant scene in which Jones pulls an orange out of his bag while sitting amongst Ukranians in a very grey and shadowy train car; the vibrance of the orange almost seems to glow. The film builds tension very well, helped by its score and the little ways that it shows that anyone could be a spy.

Not all of the artistic choices work; there are a few sequences that feel oddly artsy compared to the rest of the film. The use of shaky hand camera can be distracting. Strangely, it seems like the film would have benefitted from being a bit more conventional. It also seems to lose steam after Jones returns to the UK and faces the consequences of people discrediting his work, though it’s an important part of the story to be told.

“Mr. Jones” is in the same vein as recent films “Dark Waters” (2019) and “The Report” (2019) that depict one person’s search for the truth behind the corruption. It explores the idea that journalists can change or at least document history. Pulitzer Prize-winning English-American journalist Walter Duranty (Peter Sarsgaard) provides opposition to Jones throughout the film as he is actively complicit in covering up the atrocities being committed by the Soviets. By painting him as an antagonist, the film seems to be a call to action to journalists to be a Jones and not a Duranty.

Jones’s story has been largely forgotten, so it’s commendable that this film is bringing it back to the forefront as a reminder of the importance of not accepting a corrupt government’s lies. “Mr. Jones” may not be a perfect film, but it’s worth seeing for its strong performances and to learn about an oft-neglected part of history.