Happy International Women’s Day everyone! In order to celebrate the day why not grab one of these books and curl up on the sofa with a nice glass of wine, or a beverage of your choice. We hope you’ll find these books to be a fascinating read and will lead you to discover work by female filmmakers from the present and the past.

In this first volume of “In Her Voice”, Melissa Silverstein has collected interviews with several female filmmakers from the likes of Debra Granik (“Winter’s Bone“), Courtney Hunt (“Frozen River”), Callie Khouri (“Mad Money”), Sally Potter (“Rage”), Lone Scherfig (“An Education”) and Lynn Shelton (“Humpday”). This fascinating book gives us a unique insight into the challenges faced in production, to those who acted as inspirations to the filmmakers. 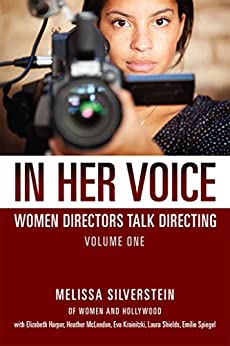 “In her Voice” is such a refreshing read because all too often we read and hear about the work of male directors while female filmmakers and their films are casually brushed to the side. You may know Melissa Silverstein as she is the founder and publisher of the excellent Women and Hollywood, a site which aims to “Educates, Advocates, and Agitates for Gender Diversity and Inclusion in Hollywood and the Global Film Industry.”

This book is a reminder to all cinephiles, film students and those working in the industry about the significance of women directors and their position in the world of filmmaking. It is also an encouraging and comforting message for women directors to not give up. Everybody’s voice deserves to be heard- your voice matters.

Renegade Women in Film and TV

I love this book! It’s an absolute delight to read and it’s the ideal book to introduce young girls (and boys) to some key female figures in the film and TV industry. “Renegade Women” features stunning illustrations by Austen Claire Clements, fascinating biographical profiles, and exclusive interviews with icons like Barbra Streisand, Rita Moreno, and Sigourney Weaver to celebrate the accomplishments of 50 extraordinary women throughout the history of entertainment.

Each profile wonderfully highlights the groundbreaking accomplishments of pioneers from the big and small screens, offering little-known facts about household names from the likes of Lucille Ball, Oprah Winfrey, and Nora Ephron as well as giving the reader profiles on overlooked pioneers like Alla Nazimova, Anna May Wong, Frances Marion. This would definitely make a nice collection to your coffee table and it’s such a wonderful gift to all inspiring young filmmakers out there.

Backwards and in Heels: The Past, Present And Future Of Women Working In Film & The Female Gaze: Essential Movies Made by Women

I have included both Alicia Malone‘s books on this list because they make a perfect pair and it’s hard to select just one. In “Backwards and in Heels” Malone charts the history of women in film with stories about the incredible women who made their mark throughout each era of Hollywood. The book also features exclusive interviews with influential women (and men) working in Hollywood today, such as Geena Davis, J.J. Abrams, Ava DuVernay, Octavia Spencer, America Ferrera, Paul Feig, Todd Fisher as well interview with various film professors, historians and experts. 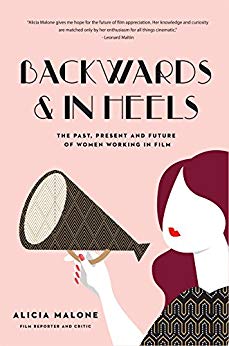 The second book, “The Female Gaze” is a perfect companion to “Backwards and in Heels”. Here, Malone examines what is “the female gaze” and how it has influenced cinema. We all know what the male gaze means and how the majority of our entertainment has been made in the perspective of a male spectator and creator. “The Female Gaze” comprises a list that details the most essential movies from the past and present made by women, and Malone delves into what the female perspective gives to each of the films. Both books are a great way to introduce new cinephiles to the accomplishments of female filmmakers and they’re a wonderful way to support women in film.

The Wrong Kind of Women: Inside Our Revolution to Dismantle the Gods of Hollywood

In 2020 it’s hard to believe that only 5% of top studio films are directed by women and less than 20% of leading characters in mainstream films are female. However, this happens to be a cold hard fact- women are still facing discrimination in the film industry and their voices are still being denied a platform. Informed by the journey of her own career, Actor, screenwriter, and award-winning independent filmmaker Naomi McDougall Jones deconstructs the casual, commonplace sexism rampant in Hollywood that has kept women out of key roles for decades.

Jones’ details the growing women-driven revolution in filmmaking which as been sparked by streaming services, changing distribution models, direct-to-audience access via innovative online platforms, and outside advocacy groups, this has all helped to enable women to build careers outside the traditional studio system. This is a brutally honest, bold and inspiring read, and is the exact wake-up call the film industry needs.

Independent Female Filmmakers: A Chronicle through Interviews, Profiles, and Manifestos

With “Independent Female Filmmakers” Michele Meek collects original and previously published essays, interviews, and manifestos from the most groundbreaking independent female filmmakers of the last 40 years. The filmmakers featured include the likes of Lisa Cholodenko (“The Kids Are All Right”), Miranda July (“Me And You And Everyone We Know”), Deepa Mehta (“Fire, Earth, Water”), Barbara Kopple (“Harlan County USA, Wild Man Blues”) and many many more!

The book features material from the magazine The Independent Film and Video Monthly, ( aleading publication for independent filmmakers founded by Meek herself)—as well as new interviews conducted with the filmmakers. “Independent Female Filmmakers” presents us with a unique perspective into voices of women filmmakers whose films span the likes of narrative film, documentary, as well as experimental filmmaking and whose work remains integral to independent film history from the 1970s to the present. This is a very well informed and a fascinating book that details the challenges these independent filmmakers have faced and also allows their voices to be heard.

What are some of your must-read books about female filmmakers? Let us know in the comments!