“Wendy” takes us back to Neverland with the new version of Peter Pan. It begins with a series of scenes full of sweetness and cuteness that will most likely hook (no pun intended) you into this film. Wendy (Devin France) is now facing the reality of survival by having to protect her brothers with possibly never returning home.

We start with baby Wendy who, at a young age, is assisting her mother in their family-owned restaurant. Her curly hair and lovely blue eyes are sure to make you say “ahhhhhh” for this entire sequence. We are introduced to her brothers and some friends. The scene ends with one of the boys hopping into a train, and this is how we have our first lost boy.

I didn’t grow up having the Peter Pan story predominant in my household. I know about it because of pop culture, but I never found myself watching the different adaptations of this story. Frankly, this is my first exposure to the story. I have never seen the animated film of Peter Pan, and I don’t plan on watching it. My thoughts about this film are solely based on this movie. This film was decent. I don’t hate nor do  love this film, so I’m lukewarm about it. 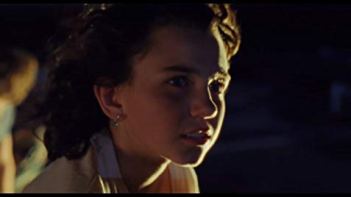 The child actors in this movie are phenomenal as their chemistry anchors this film. The visuals in this movie are wondrously and accompanied by the score, this combination will transport you into Neverland. Additionally, it may transport the audience to their childhoods. Unfortunately, the lack of narrative and the one-dimensional characters was enough to pull me away from this film. The unsteady camerawork and odd editing made it feel messy and noncohesive, which also factored into my lack of enjoyment of this film. What started as a sweet and tender film would, unfortunately, leave me frustrated and anxious for it to end.

I’m aware my opinion isn’t the most common, as I’ve read other reviews (from people who are fans of Peter Pan) who have thoroughly enjoyed this film. Please keep in mind I’m coming to this film with a completely different lens, so please take my thoughts with a grain of salt. “Wendy” is a film that will satisfy your visual appetite but will leave you craving narrative.