“Wait, which Sprouse is this?” I asked myself as “Banana Split” began. The Sprouse in question here is Dylan–brother of Cole Sprouse (as seen on Netflix’s Riverdale); one of two twins who’ve left their Disney days behind. The Sprouse brother here plays Nick, yer typical high school beach blonde with long hair and a toned physique. This tale begins with him and his best friend, April (Hannah Marks); they instantaneously mutually decide to take their friendship to the next level. Within the film’s first two minutes, you see it all: their first date, their first fight, the first time they have sex (if seeing Zack Martin of “The Suite Life of Zack and Cody” in a sex scene served as a reminder of how old you’ve gotten: welcome to the club, I’m here for you), and their eventual breakup.

Basically, everything we’ve seen in every rote teenage dramedy has come and gone in the first two minutes: from their “colossal” problems to their individual anxieties to the beat-you-over-the-head visual cues (ooh, look! Them standing in front of blue and yellow lockers–a visual metaphor for separation and forced detachment from one another!).

The question that still remains is: do we really need an overwrought reminder of the emotional trails of a teenage breakup? Mercifully, this is not that story–this is a sweet, earnest, indie wonder which assertively refuses to be focused on a teen romance. Angst and relationships? Sure. But the kind of relationship explored here is one entirely platonic; one so rarely focused on in the genre these types of flicks normally operate in; one that shouldn’t feel this fresh due to how universal it is: friendship. 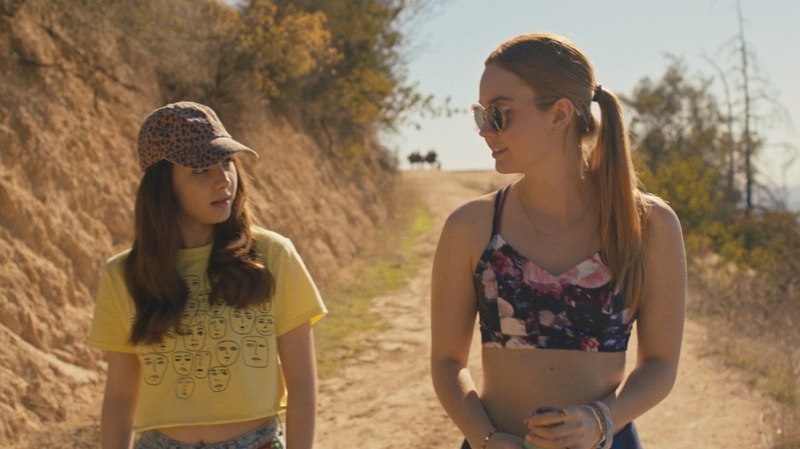 “Liberato and Marks have such palpable chemistry with one another; it practically leaps off the screen and instantly sweeps you up into the little world they’ve made for themselves.”

Nick has seemingly moved on, April discovers. “Get this torture device away from me” (referring to an iPhone), she slurs to one friend who had apparently created a fake Instagram account for stalking purposes. The individual being stalked? Nick’s newest romantic pursuit, Clara (Liana Liberato), a childhood acquaintance of Nick and April’s mutual friend, Ben (a charmingly geeky Luke Spencer Roberts).

April and co. end up in a house party–one which April’s gal pals have forced her into for the purposes of boozing her up, thus, easing her pain. And April does indeed partake. Tequila shots abound and music booming; she discovers that Clara, too, has entered the party. What happens next is an unexpected–and by unexpected, I mean totally expected–meeting between the two. This chance encounter ends in April discovering, to her jaw slackened self, that this supposed boy-stealing “nemesis” is actually quite kind and sympathetic. 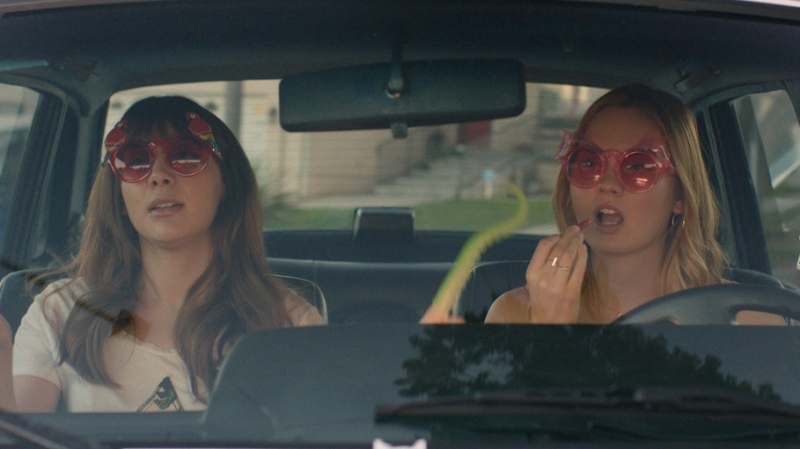 They end up swapping numbers and meeting up–at first as two people curious about one another and their relationship to Nick…but pretty soon, all mention of Nick dissipates into the background, as their mutual understanding and empathy for one another ascend to the present fore.

“And that’s where the film’s power truly lies; if you’re already long past the age of turbulent adolescence, you will recall the earth-shattering, yet humbling pain of discovering that you don’t, in fact, know everything.”

The more time they spend together, the more they both realize how unique and interesting they are. April, with her gangling awkward down-to-Earth cynicism, and her built-in bullshit detector; Clara with her aimless aspirations and confidence: both work to complete what the other lacks. This acknowledgement that one lacks what the other has–and that it’s totally A-okay–completely shatters the venomous trope that states that a girl’s source of resentment and anger comes from her insecurity. All that stems here is kindness and understanding. Better yet, this understanding isn’t rooted in their relationship with Nick; he’s barely even physically in this film.

Neither April nor Clara is defined by their relationship to him; they’re defined by how they see themselves, and how each one has a comparative advantage that works for–not against–building a fascinating friendship. A friendship you perhaps might wish you were a part of: one free of judgment, one where you can bond over a (the titular) banana split; one where you can geek out over how awesome Fight Club is (this actually happens, and it’s awesome!). 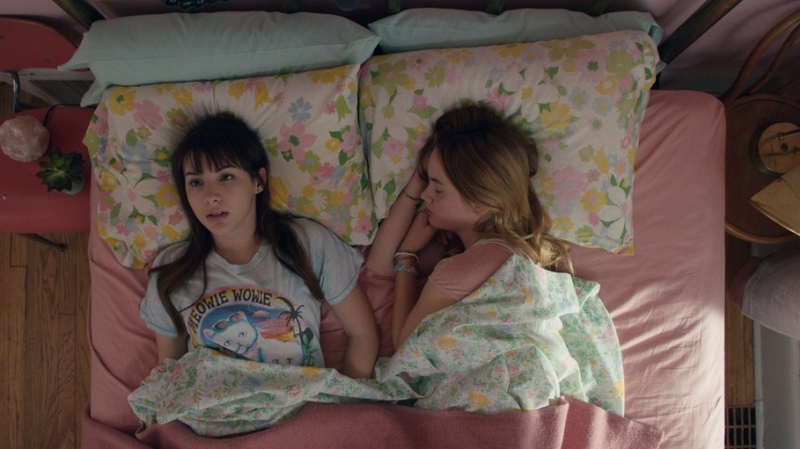 And that’s where the film’s power truly lies; if you’re already long past the age of turbulent adolescence, you will recall the earth-shattering, yet humbling pain of discovering that you don’t, in fact, know everything. Confusing your assumptions and initial perceptions for depth, instead of surface. The courage it takes to acknowledge your flaws and recognize the fact that the mere state of being human implies, by default, that we all have them.

With films like this, last year’s “Booksmart”, and 2018’s “Eighth Grade”–I can swear–teens nowadays have no idea how much *better* their role models are. Nearly gone are the days of corporate production companies manufacturing teen fantasies designed to activate tear ducts. The vividly drawn roster of characters here, and in the aforementioned films, are far kinder than we’ve been trained to expect from films about teens. 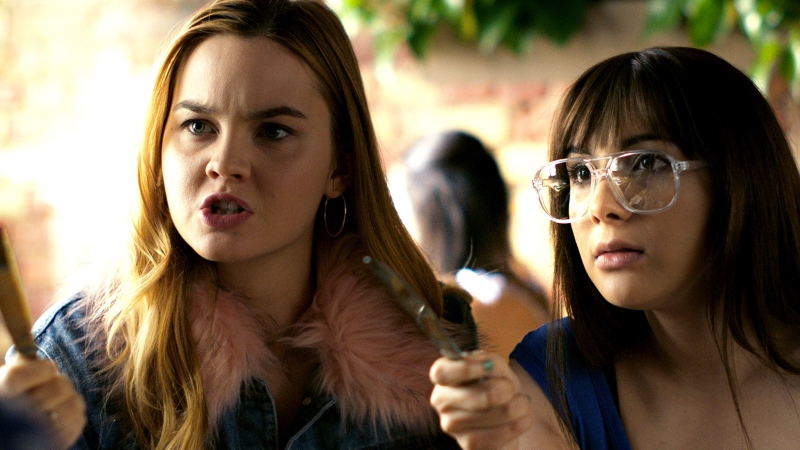 Although Marks (who co-wrote this) features her character the most prominently, she also includes generous portrayals of the humanity of her mother, Susan (Jessica Hecht) and foul-mouthed younger sister, Agnes (Addison Riecke). In fact, some of the best scenes here are those which depict her at home. Susan is depicted as a three-dimensional human being who, while consoling April in one scene, over-shares some pearl-clutchingly revealing things about her sex life. We’ve been trained to see women–particularly mothers–as people with no sexual agency; countless films have shamed women of all kinds for even suggesting that sexuality is inherent to their person. This is not that film.

“Cinematographer-turned-director Benjamin Kasulke and co-writer Hannah Marks ensure that it is all credibly performed and shot in such a way that resembles the Instagram feed of a teenager.”

Eventually, as April and Clara’s summer draws to a close, shit does eventually hit the proverbial fan: drama ensues, bleeding from things you totally shouldn’t do when in a relationship. The clusterfuck born from the tangle of hormonal teens’ emotions threatens to sever the very fabric of a genuine friendship forged through the summer. By the end, I was so desperate for them to reconcile and–as is said here–“un-fuck it up” before it’s too late (neon title cards pop up every now and then telling us how soon April’s departure date is–she’s attending college out-of-state).

Cinematographer-turned-director Benjamin Kasulke and writer Hannah Marks ensure that it is all credibly performed and shot in such a way that resembles the Instagram feed of a teenager. Liberato and Marks have such palpable chemistry with one another; it practically leaps off the screen and instantly sweeps you up into the little world they’ve made for themselves; a world as sweet and comforting as its titular dessert.