“The Wolf Hour” is set in an era ripe for cinematic depiction; the summer of 1977. We spend part of this summer with reclusive agoraphobic June (Naomi Watts) as she is cramped in the smoldering heat of her stuffy, dusty, apartment in a dilapidated South Bronx walkup. An apartment with a window which–as June peers through with a cigarette in nudged between her pointer and index finger–seems to be a television with a crime show playing on repeat.

The apartment itself is coated with dust; we see piles of books graying with grime, and what would appear to be discarded items pilling up in every corner. June herself has greasy coffee-colored hair; she is fleeced with a perpetual sheen of sweat. It’s miserable–the oppressive bleakness in her apartment mirrors the brutal crime outside. This is a rousing, dark look at a depressed, tortured woman’s self-imposed isolation. A near-colorless depiction of a mental struggle which is carried defiantly, from beginning to end, by a stunning performance from Watts.

Outside this apartment–as we learn from brief radio snippets, and clips from her old-fashioned television set–crime looms large. Amidst the sweltering heat the, the .44 caliber killer–who only targets women with long, dark hair casts a shadow over the collective subconscious of this particular time and locale. This paranoia is compounded by a stranger’s insistence on hitting June’s buzzer at odd hours in the day; presumably a prank, yet she can’t help but fear that something malevolent is afoot. 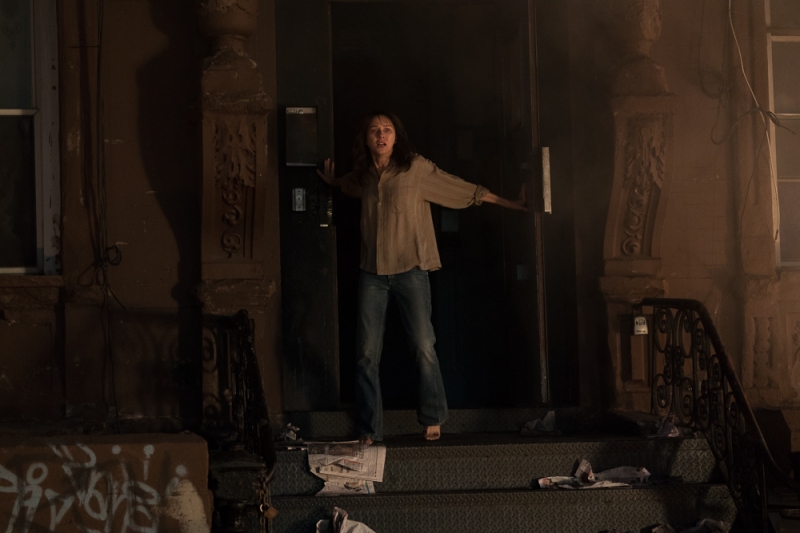 Think “Rear Window” but, instead of bearing witness to particular crime in an adjacent building, our agoraphobic heroine is a spectator to the impact of corrupt government policies which have led to the cultural dilapidation of this certain place, on this certain era. She spends some time with its players, too: people who live in squalor, people who don’t–yet impose themselves into her life. Enter her concerned, yet supportive sister figure (Jennifer Ehle) who seemingly has altruistic motives, yet June can’t help but think otherwise; a friendly delivery man, Freddie (an always interesting Kelvin Harrison Jr.); a disgusting pig of a cop and a male prostitute (Emory Cohen).

“Think “Rear Window” but, instead of bearing witness to particular crime in an adjacent building, our agoraphobic heroine is a spectator to the impact of corrupt government policies.”

We learn, gradually, that she is a tortured artist; an author who has written a once-successful book with a tragic past linked to it. The emotional depths that de-glammed Watts excavates here guides us through June’s one-woman journey toward humility. This, and the realization that the world’s problems–which we are initially led to believe that June’s are a microcosm for–are much bigger than those of her own. This is June’s excursion, with a history that unfurls itself throughout the film’s run time; and one which elucidates why June is constantly at war with herself inside her own head; how being inside her own head has been consuming her each and every day. 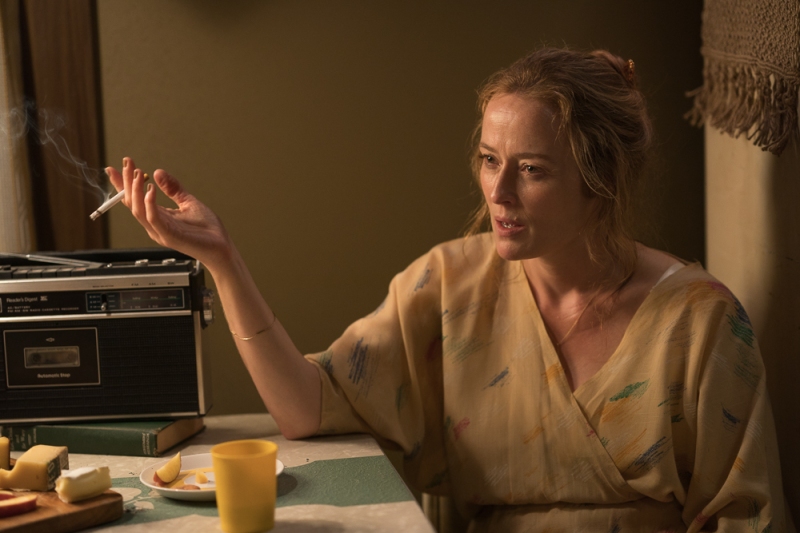 Directed by and based on a smart script by Alistair Banks Griffin; we learn more about June through circumstance and strategically subtle dialogue. We grasp that–despite her difficult situation–she desires neither money nor pity. The novel she’d written is a critique on establishment corporatists; a critique which had apparently hit so close to home that–I won’t spoil what happens–her personal life has taken a harsh blow because of it.

“There’s a freshness which comes from how we seem to have finally gotten a film about a tormented female writer. One which factors in all aspects of all that her loneliness comes with.”

One of the film’s real stars–besides Watts, is its production designer, Kaet McAnneny. June’s smut-coated apartment (and the mere act of looking at another human being living in it) induces a feeling so visceral you will perhaps want to take a cold shower and skip straight to spring cleaning. This production design is shot by Khalid Mohtaseb, he compliments it by maneuvering through the dingy, unkempt apartment in a way that evokes claustrophobia; a claustrophobia so fully realized, it’s no surprise to us why June is ostensibly losing grasp of her faculties.

There’s a freshness which comes from how we seem to have finally gotten a film about a tormented female writer. One which factors in all aspects of all that her loneliness comes with. We see her making the conscious decision to ease her sexual frustration by availing of a newspaper service. Here we meet a shy, yet kind male prostitute; portrayed so sympathetically by Emory Cohen you feel a sudden emptiness when he leaves her apartment. Luckily, the film doesn’t pretend that Watts is average looking–in a lovely post-lovemaking conversation the two have before parting ways, he tells her that she doesn’t look like the kind of woman who would avail of this service; a service which she consciously availed of. It’s lovely seeing how the film frankly, yet intimately, depicts a woman taking the initiative to aid this particular frustration in her life without judgment.

“The Wolf Hour” is an absorbing drama which only slightly covers things like racism, trauma, sexism, and urban isolation. Unfortunately, some interesting tangents–particularly the one concerning Freddie (where he tragically reduced to a mere plot device here rather than a source of genuine drama), remain underdeveloped. But perhaps, like the un-fired gun June is given at one point (no, the principle of Chekhov’s Gun does not apply here), the lack of development here is a testament to how much June–and by extension, those like her who live sheltered lives–lacking in life experience. Perhaps that’s the point.