It’s highly contagious. Anyone could have it. It starts with a high fever. There isn’t a known cure. It threatens mankind as we know it. You may be inclined to believe that what I am describing relates to the COVID-19 outbreak, but I am actually describing the condition that takes place in Neasa Hardiman‘s debut feature film, “Sea Fever”. The film follows the crew of a fishing trawler who succumb to a strange infection, their only hope is the apathetic and analytical-minded marine-biology student Siobhán, played by the memorizing Hermione Corfield. This timely well-crafted science-fiction thriller is definitely one to seek out for Corfield’s powerhouse performance alone. It’s also a riveting story which builds on tension and suspense, proving that genre storytelling is very much alive and kicking.

We follow Corfield’s Siobhán who is so socially awkward that she would rather study then join her fellow students in their celebrations for someone’s birthday. Reluctantly she agrees to join a fishing trawler off the coast of Ireland as part of her studies. The boat’s crew is led by couple Gerard and Freya (Dougray Scott and Connie Nielsen), along with Ciara (Olwen Fouéré), Johnny (Jack Hickey), Omid (Ardalan Esmaili) and Sudi (Elie Bouakaze). Introductions don’t exactly go smoothly, as Siobhán isn’t exactly a people person. Things get even more awkward when she removes her hat to reveal her striking red hair: an old sailors’ superstition is that redheads are considered bad luck. 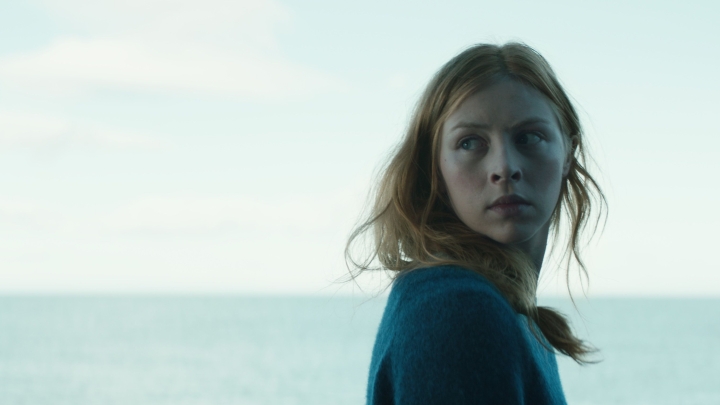 They begin their journey, with Gerard taking them into the exclusion zone. Things take a dramatic turn when the boat collides with something mysterious lurking under the ocean’s surface. They are unable to break free and slimy vivid blue substance is spilling from cracks in the trawler’s hull. It falls on Siobhán‘s shoulders to investigate as she’s the only one who can swim (fishermen don’t swim) and when she dives under the water we finally see what it is: a monstrous-looking sea creature, larger than anything else recorded with luminous tentacles reaching out to snatch whoever invades the creature’s space. Luckily, they manage to break free and they soon find themselves back on their way. However, the strange substance which has made its way on board may actually be the real threat.

“Sea Fever” is more of a sophisticated psychological thriller rather than a straightforward horror. It is definitely a very relevant film which in doubt will hit close to home for many of us.”

Penned by Hardiman, “Sea Fever” pays homage to many classic sci-fi films such as “The Thing”, and “Alien” and taps into that most primal fear: the unknown threat. The screenplay may seem familiar in places, but Hardiman’s direction and Corfield’s performance manage to make this premise seem so fresh and original. The film works because of Hardiman’s appreciation for the films and texts that have come before, not only is this an entertaining watch, but it’s clear that this is a film made by a cinephile for cinephiles.

The atmosphere slowly builds as all the crew (even Siobhán herself) may be infected, and everyone begins to turn on each other. The praise must be had for the cinematography, the sound design and the score. The camerawork by cinematographer Ruairí O’Brien is brilliant and claustrophobia is gradually built through the use of close-ups which get tighter and tighter. The underwater shots are eerily beautiful to watch and when you realise they were shot in a water tank, you cannot help but be impressed by the sheer levels of craftsmanship involved.

“Like Sigourney Weaver’s Ripley and Linda Hamiton’s Sarah Connor, Siobhán is a strong female character who we should aspire to be: strong, determined and fiercely independent.”

The effective and elaborate sound design also helps to create the atmosphere; the heightened sounds of each groan and mechanical clunk of the ship make it seem alive, and the sounds of the sea in the background helps to remind us all just how isolated and vulnerable all of the characters are. Christoffer Franzén‘s score helps to add to the eeriness and the thrills. It is also worth mentioning the work by production designer Ray Ball as well as the art direction by Shane McEnroe and the make-up by Kathleen Garbutt, whose work helps to create a very realistic and lived-in ship interior and a very convincing sea creature that is both hideous and beautiful at the same time.

Hardiman has had a long career in television, and it’s great to see her make the transition from the small screen to the big screen. She manages to put her own fresh spin on the Creature Feature, with a dash of Body Horror. More importantly, along with Hermione Corfield, she has managed to create a bold, complex and fully developed female character who uses her intelligence as her weapon of choice. Like Sigourney Weaver’s Ripley and Linda Hamiton’s Sarah Connor, Siobhán is a strong female character who we should aspire to be: strong, determined and fiercely independent.

Hard-core horror fans may be slightly disappointed by the film’s lack of jump scares and gore, but “Sea Fever” is more of a sophisticated psychological thriller rather than a straightforward horror. It is definitely a very relevant film which in doubt will hit close to home for many of us. With the COVID19 outbreak still raging on, many cinemas remain close. Luckily, “Sea Fever” will be making history with Gunpowder & Sky’s making the announcement that the film will be headlining their first-ever LIVE stream premiere on 9th April. 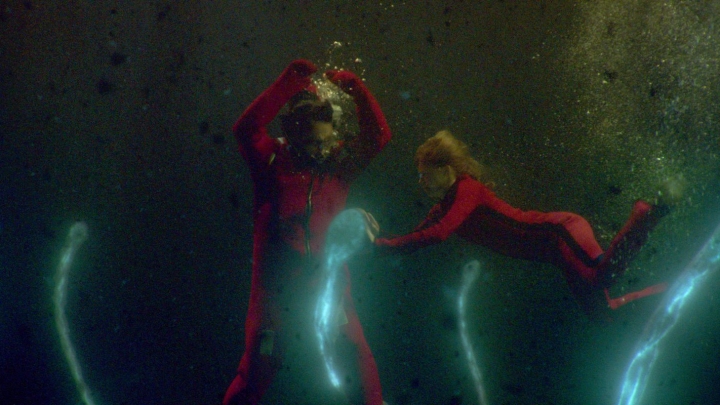 The live stream event will take place on https://seafever.watchdust.com on Thursday, April 9th, 5:00pmPT/8:00pmET.  For a small pay-per-view fee, fans can tune in to watch the official film premiere together, post their comments in a chatroom, and have their questions answered by the cast and crew via a moderated Q&A following the credits.  The event will kick-off the release of “Sea Fever” On Demand and Digital on the 10th of April in the US and 24th April in the U.K. and Ireland.