One little crime, that’s all it takes. Someone may commit this out of greed or coercion, perhaps you just want to experience that thrill, or maybe you do it to survive in a cruel, unbalanced society. Sonejuhi Sinha’s directorial feature debut, ‘Stray Dolls’ (2019) cautions that one small deed can excessively spiral with disastrous, life-altering consequences.

Upon arriving in America, Riz finds herself in what she perceives as temporary accommodation with a live-in job at a motel run by Una, played by Cynthia Nixon. The motel dishevelled and visibly no five-star establishment houses a variety of secrets, seedy characters and allegories of the shattered perceptions many have with the States. Upon destroying her passport, Una at first establishes herself as an antagonist but has little part to play until the climax of the film. Tidying rooms, Riz is forced to share with a volatile, disenchanted young woman named Dallas, who coerces Riz into enacting one small theft in exchange for returning a stolen photograph. 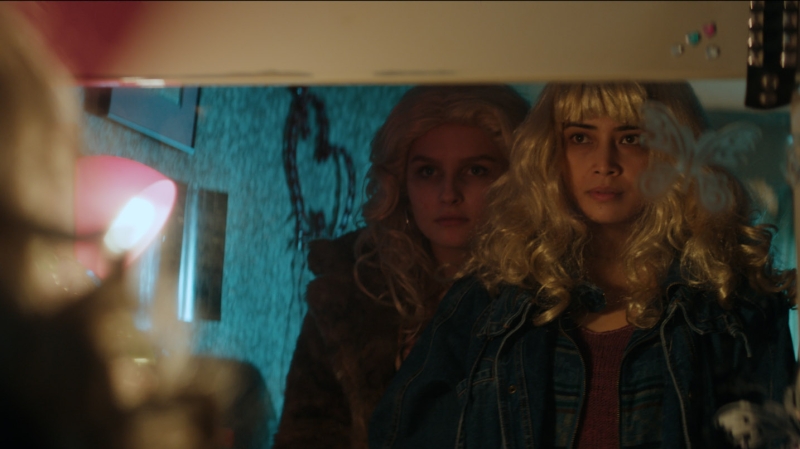 Reflective of the inherently senseless pursuit of ideas or dreams, ‘Stray Dolls’ deflates the entitled sense of narcissism which is the ‘American Dream’, which only applies to those white, already with moderate income and of course, male. Sinha is bold in her venture into an indie feature-length, refusing to bow to the pressures one would expect from this narrative, but ‘Stray Dolls’ wanders rather than flows.

And herein is where the issues begin, as an indie thriller with potential stumbles. The film correctly hones onto the adolescence of the young cast as they come of age, love, lust and fight against those who take advantage, particularly the men. The difficulty emerges in motivation, which detaches us from our primary protagonist Riz, Geetanjali Thapa giving out a little too much of a ‘controlled’ façade. From a narrative standpoint, Riz’s ability as a lock-pick and personality alterations while surviving in America show promise, but there isn’t substance to Riz, rather there is depth to the scenarios surrounding her. Moving the plot forward, Riz’s actions aren’t character-driven, but instead story-driven, and as such, the audience’s focus shifts to the secondary protagonist, Dallas.

“Sinha is bold in her venture into an indie feature-length, refusing to bow to the pressures one would expect from this narrative, but ‘Stray Dolls’ wanders rather than flows.”

With props towards Olivia DeJonge, who offers dimension to Dallas, this unfortunately also elevates her to the audience’s principal interest. There are no victims in this film, despite the violent ends for a few characters, and sufferings of others, particularly Riz. An interesting dynamic, where the ends and actions do not justify the experiences. DeJonge comes the closest to ‘redemption’, or at the least a recognisable portrayal of empathy, the audience can get behind.  Fiesty, engaging but still wrought with troubles, DeJonge evolves the role as the film progresses, with natural chemistry developing with other characters. Enabling Dallas to be express an authentic display of emotions, there’s a profoundly personal touch to the character which feels accomplished, earned.

“Flirting with ideas, Sonejuhi Sinha’s ‘Stray Dolls’ ensnares a great deal of interest, with the tremendous promise of the filmmakers future.”

Illustrating the disconnection with ‘Stray Dolls’, narrative can’t align with actions or portrayals. The direction seems comparable to that of a short film, where decisions, actions and characterisation has less opportunity to reveal itself naturally. While the script is taut, with delicate touches of storytelling lingering throughout, the sudden drastic decisions, particularly surrounding drugs, stem less from a natural development and more a drive to inject a perception of grittiness, and while the trope of the well-behaved introvert taking a rebellious lurch, the pace in which Riz leaps feels forced.

While portrayed wonderfully by Nixon, the motivations behind Una and Jimmy are unfocused and waste potential for a more comprehensive narrative sub-plot. While Nixon brings earthy humour to the role and is a highlight for the film, Robert Aramayo’s false-machismo as the blustering, masculine-devoid Jimmy also secures the film’s darker humour and serves as a pivotal focal point where Riz and Dallas come together. But while his place in the text is that of the young man wishing to play with the big leagues, it feels superficial, with throwaway lines about his lack of education, and upbringing feeling tact on. 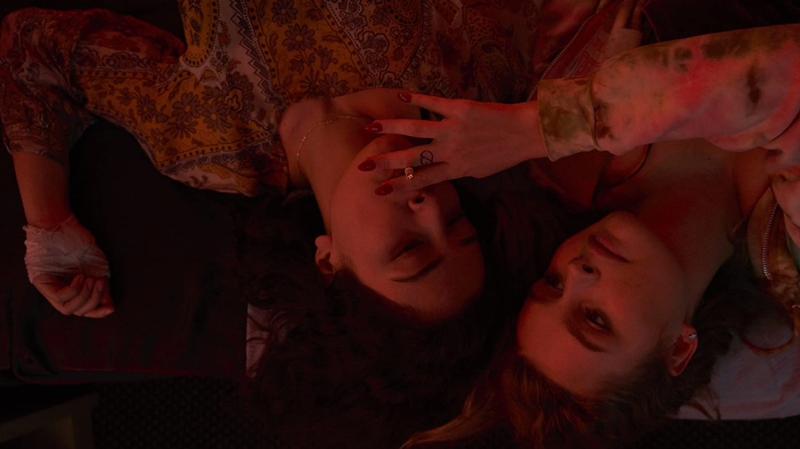 Striving for an indie, bordering art-noir styling, ‘Stray Dolls’ cinematography skirts with the notion, never excelling with the motif. Save for a few shots, one particularly gorgeous wide-angle lead following a school break-in, where the smoothness of the cinematography shudders in reflection to the anxiety, the muted colours emerging into a brightness unlike the rest of the film.

Flirting with ideas, Sonejuhi Sinha’s ‘Stray Dolls’ ensnares a great deal of interest, with the tremendous promise of the filmmakers future. As an outing into feature-length, ‘Stray Dolls’ has teeth and is a refreshing take on the ideals of supposed American prosperity. Particularly in its depiction of young women, not as victims, but as catalysts who accept their actions and refuse to make apologies or excuses. It fails to bite down hard enough, taking potential characterisation and pushing decisions early into the film, rather than allowing them to develop naturally.