Fernando Meirelles’s 2008 film “Blindness” is a thriller which shows us exactly how not to deal with an outbreak.

When people across a major American city start to suddenly lose their sight it quickly becomes apparent that whatever is causing this is contagious. With no other symptoms the sufferers are rounded up and put into quarantine. They have no contact with the outside world and are simply locked up in isolation with no doctors, no support and only meagre rations.

The eye doctor who saw some of the earlier patients (Mark Ruffalo) is taken in and his wife (Julianne Moore) wants to stay with him so claims to be blind too.

Somewhere between grave mistake and a blessing in disguise, she is put into quarantine along with her husband and all the other blind people. As the quarantine facility gets more and more full their enforced society starts to break down and the inhabitants and forced to do increasingly desperate acts just to survive.

The most immediately frustrating thing about this film is not the premise of instant blindness, but the way the government deals with it. The quarantine facility is a disused institution with barely any running water. For no reason at all the poor inmates aren’t even told where the bathroom is. The voice on the TV tells them to elect a ward leader for their area and they are given pitiful rations to distribute amongst themselves.

There is apparently no attempt whatsoever to examine or treat these people or provide for their most basic of needs. So is it any wonder that their morality breaks down?

If we push that glaringly frustrating aspect to the side though we can look at this as a Lord of the Flies style building up then breaking down of a makeshift society, and all the allegory that entails.

Pretty soon people are urinating in the corridors and dropping trash all over the place. Of course, nobody can actually see all of this but still, they’re tripping over it and don’t bother to pick it up.

Tribalism also takes hold as the different wards compete for scarce food rations and argue over who buries the dead. The government, for reasons which aren’t explained, does not remove anyone who inadvertently dies while in quarantine but just throws them one single spade with which to dig graves. 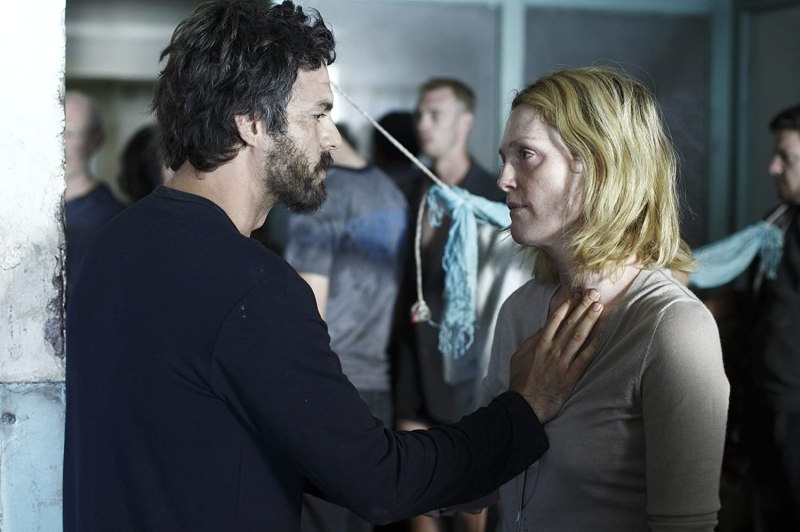 Things take a darker turn in the ward wars and there are a couple of group rape scenes. While it is highly conceivable that a situation like this would lead to rape, the way this is handled is far more prolonged and upsetting that it needs to be. Although it’s not gratuitously voyeuristic, it is unnecessarily harrowing.

At least there is an in depth conversation about this and an attempt is made to explore the nuances of the situation. It doesn’t really get to the depth of the issue of women’s bodies being treated as a commodity, or rape being used as a weapon of war, but it tries, for which I am somewhat grateful.

Although it would have been easier for Julianne Moore’s character (none of the characters are given names) to take the lead, given that she’s the only person who can see, she takes on a caretaker role and her husband is a leader. It’s an interesting dynamic because he grows to find her care belittling and frustrating and their relationship is strained. We’re not so sure how she feels about having to wash and clothe her husband because his perspective is given priority. That carer dynamic could have still been explored if she had been allowed to take the lead so it’s rather illogical.

Women’s bodies are, mostly, photographed mostly in a similar way to men’s. With nobody able to see each other nakedness is not really an issue and the characters all try to come to terms with that.

It brought to mind other films by contrast. In particular “Killer Joe” (2011) featured a woman who pointedly spent an entire scene walking around naked. But when it came to a man’s body later on the camera somehow managed to find discrete and modest angles which were apparently not previously available.

Unfortunately this gender blind approach to showing bodies is let down massively towards the end of the film in a gratuitous giggly group shower scene. But it was a noble effort at least for the most part.

Some elements of this film make very little sense and some elements are unnecessarily horrendous. But it clearly makes efforts to explore some societal themes in more than just a cursory way. Power structures, human nature, greed and shame are put under the microscope.

While its flaws outnumber its qualities, it is at least relevant. And if nothing else you may find reassurance that for most of our quarantines and isolations we were shown where the bathroom is.