“True History of the Kelly Gang” is the latest adaptation of the story of Ned Kelly, an Australian outlaw. Directed by Justin Kurzel, this movie is stacked with talented actors; George MacKay, Russell Crowe, Charlie Hunnam, Thomasin McKenzie, Nicholas Hoult, and Essie Davis. It follows Ned Kelly from a young age and his journey to the man he would become.

I’m in the minority when I admit having no idea who’s Ned Kelly. This film is divided into three parts; Boy, Man, and Monitor. It begins with adult Ned Kelly writing his story (right after a caption stating everything we’re about to witness isn’t true). For someone like myself who isn’t familiar with Kelly, this caption, followed by the scene, left me a bit confused. We then transition into a young Ned Kelly (Orlando Schwerdt), where we quickly learn about his family and everything they’ve endured. Ned’s forced to grow up fast so he can contribute to his family and survive.

After his father passes away, his mother sells him to Harry Power (Russell Crowe). Whos is meant to teach him survival tactics and it’s from Power that he learns to write his story to prevent others from fictionally telling it. I was blown away by the acting from Schwerdt, he was able to keep up with a memorable performance from Russell Crowe, who nearly walks away with this film. Also, his dynamic with Essie Davis was excellent as they portrayed a relatable and believable mother and son relationship. It’s evident that his relationship with his mother was the catalyst to Kelly’s actions which would lead him to be the outlaw. 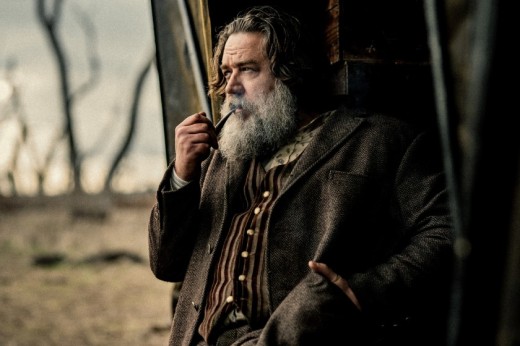 The second act follows adult Ned Kelly (George MacKay). After serving time, he returns home and reunites with his mother and siblings. He then learns about his family’s past, pushing him to embrace his darker side. Thomasin McKenzie, as Mary, brings the perfect amount of tenderness and sweetness to MacKay’s Kelly. And Nicholas Hoult as Constable Fitzpatrick is deliciously vile perfectly following Hunnam’s, Sgt O’Neil. But without a doubt, this is George MacKay’s film.

“True History of the Kelly Gang” is a violent, gory film anchored with great performances and a unique yet fitting punk-rock soundtrack.”

His performance is phenomenal as he completely disappears in this role. Although he’s been acting for years, it’s just recently I’ve been becoming familiar with his work. I’ve only seen him in “Ophelia“, starring next to Daisy Ridley, and the most recent critically acclaimed film “1917” where he gives an unforgettable performance. George MacKay is an actor who’s been impressing me with the small number of films I’ve watched, and I can’t wait to see what he does next.

The production design by Karen Murphy and the cinematography from Ari Wegner is stellar! The world-building in this movie is so well done, engrossing the audience into an impoverished isolated home in the late 1800s. The costume design is nicely done, considering the amount of nudity in this film.

“[But] without a doubt, this is George MacKay’s film. His performance is phenomenal as he completely disappears in this role.”

However, some of the gory scenes were a bit too much for me. During the third act, in which there’s a shootout, the amount of blood is so much that it reaches the point where it becomes unrealistic and therefore unbelievable.

My biggest issue was the third act. The buildup to the climactic sequence was well done, but the climax just didn’t deliver. In a final shootout, there is nothing that is visible but a few candles and the ammunition of guns, and in my opinion, it was unfortunate to have that be the final scene.

Overall, “True History of the Kelly Gang” is a violent, gory film anchored with great performances and a unique yet fitting punk-rock soundtrack that excellently embraces the quote “The myth is more profitable than the man.”