Had enough of princesses? Us too. Thing is, for just shy of a century Western animation has been littered with naïve views on female protagonists, in no small part down to the Walt Disney Company. While their heroines are far from the two-dimensional stereotypes many preach, there is one collective which dive deeper into culture, our psyche, and on occasion, history. These are of course the Disney villains.

A dynamic which stretches across the fifty-eight animated library more often than other narratives is of the wicked stepmothers or different forms of antagonistic surrogate parent. These are the films where the protagonist’s primary caregiver or secondary characters are also villains. Whether the archetypical Lady Tremaine from ’Cinderella’ (1950) or the ex-wife Ursula from ‘The Little Mermaid’ (1989) or redemptive Dr Robert Callaghan ‘Big Hero 6’ (2014).

The Wicked Stepmother frequently defines a fairy-tale, spanning centuries of storytelling. This plot device of antagonistic surrogate parenting has never truly vanished, or in the case of Walt Disney films, altered much in its mechanic, especially for the women. Indeed, this is perhaps one of literature’s (bolstered by cinema) most intrinsic tropes and pervades in children to this day.

Largely, this is down to two notable models; the previously mentioned Lady Tremaine and The Evil Queen from ‘Snow White and the Seven Dwarves’ (1935), even though the two have zero interaction outside of the infamous poison apple sequence. Disney films, and by extension fairy tales, traditionally lack parents, usually a mother, for in a tale of morality and adolescence there are few difficulties writers can offer their characters than the lack of a parent. A base narrative drive which forces the protagonist to venture on their quest of maturity.

“The Wicked Stepmother frequently defines a fairy-tale, spanning centuries of storytelling. This plot device of antagonistic surrogate parenting has never truly vanished, or in the case of Walt Disney films, altered much in its mechanic, especially for the women.”

Historically, fear of divorce was rising in the states, as a woman’s place in the workforce, in the world, and post-war America was different than the suburban dreams men had. Disney instilled something with Lady Tremaine, a sweeping concern across the nation as families banded together to overcome the horrific years before. Nuclear family ideals were going to propel America, and what was more terrifying than someone, a woman, whose sole purpose was to break the family dynamic? Wicked Witches held less power than the thought of a ‘spinster’ who could deconstruct family, community and challenge a steadily slipping male authority.

Tremaine’s cruel actions, with malicious intent, heightened the necessity for the audience to stand beside a protagonist who was, arguably, pretty bland. A common trait with earlier Disney movies is that the villain has a richer characterisation than the hero, making it easier for the audience to sympathise with the hero, and detest the villains, similar to those tales as old as time.

Now go with us for this one, but Ursula the sea-witch from ‘The Little Mermaid’ has those crazy ex-wife vibes, right? Originally intended to be Ariel’s aunt, the family disconnection in the final film leaves Ursula’s relationship with King Triton on the grounds of a previous partner or close friend, with an undisclosed rift between them. Her motivation goes beyond power – it’s personal.

“A common trait with earlier Disney movies is that the villain has a richer characterisation than the hero, making it easier for the audience to sympathise with the hero.”

Ursula’s psychological stance in the narrative stretches beyond a large, independent purple woman who don’t need any man. In particular, she’s the only source of female authority in Ariel’s life. Her sisters have little to no merit within the plot, and all of those who command her or offer advice are men. Ursula is the one who awakens latent womanhood in Ariel, who just so happens to now be sixteen. Pat Carol delivers an iconic voice-role as the cephalopod, teasing and tempting Ariel’s to realise that it is her body, her femininity, not her independent nature, which will appeal to men. She teaches Ariel, for better or worse, things a father never could.

Where previously women were claiming freedom through a divorce, now, the late sixties to eighties saw a sexual revolution, a new worry for American wholesome families as their daughters were ‘disobeying daddy’, shifting their fatherly love to another man. And all that was needed was a little help from the sea witch, a raucous, older woman with full control and confidence in her ability, her image, and her womanhood, who takes delight in advising Ariel to use her “body language”. It had been nearly forty years since the stepmother, but still – a single woman was all it took to dethrone patriarchy.

By the Millennium American cinema had embraced the single parent, the divorcee, and stepfamilies – so which parent was the villain now? Well, those pushy, narcissistic doters of course. With us so far? Grand. Now, for Disney’s fiftieth animated feature, an anniversary, a landmark in cinematic history they would go on to produce one of their finest pieces to date ‘Tangled’ (2010). With it, Disney returned to a vast array of their often-lampooned tropes from the nineties, but with a twist. Captive princess? Check, but she was curious, charming, and her damsel status was removed in place for a far more active role than many of her predecessors. A Prince? Not so much, now a rogue, a rapscallion and thief. One thing remained unchanged though, a wicked mother, perhaps the closest to a substantial relationship between villain and hero – Mother Gothel. 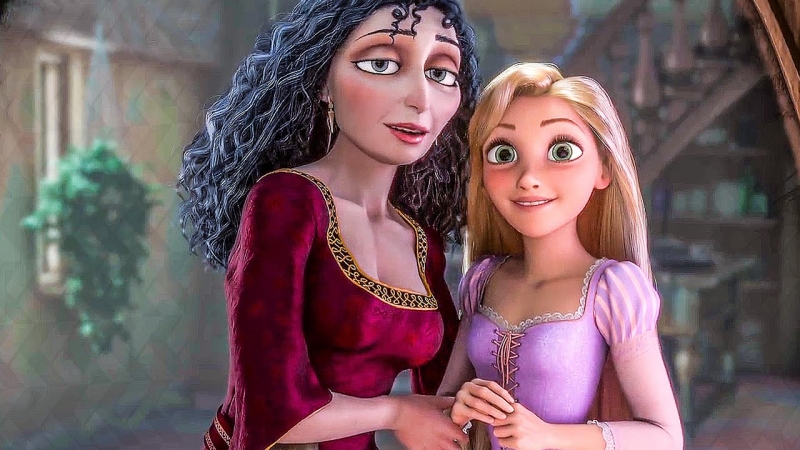 Coining the phrase ‘helicopter parent’, referring to those mothers who ‘hover’ around their children incessantly, academics discussed a trend of (usually Jewish) mothers who also acted as antagonists. Offering (at first) a comedic delivery for Gothel, Donna Murphy serves a sickeningly sweet passive-aggressive mother who maintains her ‘nesting’ syndrome by belittling Rapunzel’s looks and gaslighting her into remaining at home forever. Living the life, she could not, Gothel was quite literally living life through her daughter. Her hatred ran deep, her possessive nature unruly. The animators left tiny clues in Gothel’s true motive, Rapunzel’s anti-ageing capabilities as affection, which should feel maternal, was instead centred around Rapunzel’s hair, the source of the magic. It was difficult to let one of the fairy tales hegemonic cores go, so Disney adapted, the stepmother was off-limits, but the conceptual monstrous mother was still, even now, a villain.

“Men are allowed to find redemption from evil, so long as their intentions were noble, women? Well, they’ll always pursue beauty, vengeance, and strive for out and out wickedness – and you know what? We love each and every one of them for that.”

We would be remised here at In Their Own League to not briefly mention to reverse of the coin, the extent to which male antagonistic parents fair in the traversal of time. While the conceptual ‘step-father’ is rare, it rears more as father figures or caregivers. Notable examples of this in literature, and of course their Disney adaptations, can be found in Captain Hook ‘Peter Pan’ (1953), Judge Claude Frollo, John Silver ‘Treasure Planet’ (2002) and most recently Dr Callaghan/Yokai from ‘Big Hero 6’ (2014). Their inclusion and design often relegate itself to patriarchal thinking of the period – particularly Captain James Hook. A post-war man, trying so desperately to re-capture his youth, beleaguered by the young, vaguely feminine boy who threatens him.

The overall curving trend for these villainous surrogate fathers takes a U-turn, unlike their female counterparts. As John Silver, Jim’s father figure is offered redemption in the film’s climax, sacrificing the treasure he has hunted his entire life for to save his new ‘son’. Even more so, a remarkable change of pace occurs with Callaghan whose entire motivation centres around the love of his daughter, and the pursuit of revenge out of grief at her loss at the hands of the films fake-out antagonist. Men are allowed to find redemption from evil, so long as their intentions were noble, women? Well, they’ll always pursue beauty, vengeance, and strive for out and out wickedness – and you know what? We love each and every one of them for that.