This 2010 film, directed by Anton Corbijn, stars George Clooney as an assassin called Jack who wants to get out of the profession but carries out one more job. He travels to a small village in Italy to build and deliver a bespoke weapon.

While there he forms a relationship with a sex worker Clara (Violante Placido), tries to avoid being assassinated himself, and is generally melancholy.

Yes that is quite a light plot. It’s more of a character study for a troubled assassin, but where a film like “You Were Never Really Here” (2017), or “In Bruges” (2008) makes you feel for the lead, this one leaves us cold.

The striking thing about this film is how cloyingly sexual all of the women are. Yet none get very close to having a personality or a back story. It contains a litany of objectifying shots and stale tropes. 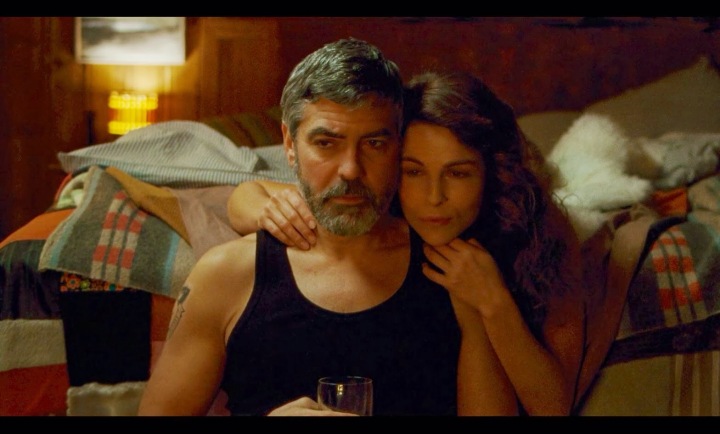 Ingrid
(Shot in the head)

In the opening scenes Jack is shown with an attractive woman, Ingrid (Irina Björklund). She is only shown for a couple of minutes but apparently had a lasting impact on Jack since he feels sad about shooting her in the head without a moment’s hesitation.

She’s first shown as a disembodied head over his shoulder while he stares ahead, brooding. Jack is the focus here and she is the object behind him.

“The striking thing about this film is how cloyingly sexual all of the women are. Yet none get very close to having a personality or a back story. It contains a litany of objectifying shots and stale tropes.”

The camera angle changes and her bare arse is shown in the flickering fire light – For a full ten seconds. Jack is fully clothed.

Go ahead and count to ten to see how long this feels.

Looking to the Menkes List (5 camera techniques that objectify women in film) we see that women are often shown as fragmented body parts on screen. This reduces them to the aesthetics of an individual body part rather than a fully human whole.

Clara
(Sex worker afraid of being murdered by a prostitute-killer)

Moving forward we go to Italy and meet the sex worker with whom Jack develops a relationship. Our introduction to Clara is through a full frontal shot, while Jack is again fully clothed. Exactly the same scene could have happened without the audience gazing upon her completely naked body.

Later on they are have sex, which is shown to the audience simply as her bare chest, bathed in red light. It’s a full minute of moaning and jiggling boobs. At this time we know almost nothing about her. She is just a body for us to stare at.

Go ahead and count to a minute this time, see how long it feels.

After a while we learn she has read about prostitutes being murdered in the papers so she is scared and carries a gun. The story of the murdered sex workers is not explained and is barely even relevant. It smacks of being plucked off the trope shelf for ‘things that might scare a woman’ without really considering what it is saying about women and society’s attitudes towards sex workers.

Just in case we got too used to seeing Clara fully clothed, as soon as the pair arrive at their picnic she immediately strips off and frolics half naked in the water, awash with soft hazy sunlight. As women do.

“Although elements of this film showed a slightly different take on a stoic American macho man, its blatant objectification, and disposability, of women was nauseating.”

Mathilde
(Shot in the head by a rigged gun)

And finally to the only other woman in the film, Mathilde (Thekla Reuten), who wants to buy the gun. Unlike the others she has a goal. She has intrigue and mystery which suggests that she has a backstory.

But it’s an illusion; we don’t actually know a single thing about her apart from she wants to kill Jack.

While she is not actually seen naked she is stared at by Jack, sunshine glowing through her clothes, making them almost see-through. Her cat-like demeanour and overly soft tone of voice are very highly sexualised.

As she tests out the gun we see an interesting expression on Jack’s face. He seems to be both surprised and impressed with her ability to handle the weapon. Another trope off the shelf: a woman is assumed to be incapable until she proves otherwise to a man.

Although elements of this film showed a slightly different take on a stoic American macho man, its blatant objectification, and disposability, of women was nauseating.

All women were either murdered or afraid of being murdered, and all were ogled by both Jack and the camera.