When the film that puts you on a lot of people’s radar is about a killer tire blowing people up and filled with B-movie dialogue, you make quite a unique first impression. Well, that’s what happened with French writer/director/DJ Quentin Dupieux when his horror? film “Rubber” put him on the map and gain cult following. Now after creating a bunch of genre-bending treks that mix in his unique style of comedy, Dupieux returns in 2020 with “Mandibles” – a comedy about two friends and their giant fly. Personally, “Rubber” never really was my thing since the comedy felt so random and the plot was essentially non-existent, but Dupieux creates a much more concise story and style with “Mandibles” that could easily resonate with a much wider audience. The film follows dim-witted best friends Manu (Gregoire Ludig), a beach bum unenthusiastic about life, and Jean-Gab (David Marsais), Manu’s bestie with family issues, as they attempt to earn some quick cash by doing a simple delivery job. However, after nabbing a car for them to use, the two discover a giant fly stuck in the trunk and aren’t sure how it got there. Now that they’re stuck with this giant fly, their plans get derailed as they go on misadventures with it hoping that they can domesticate it and make a fortune. Basically, “Mandibles” is “Dumb and Dumber” find a giant fly and it’s amazing. 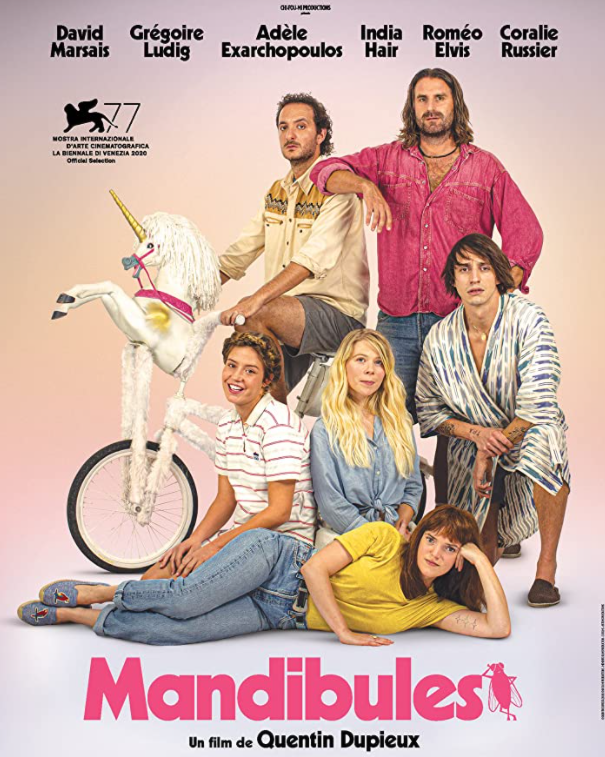 “Mandibles” is “Dumb and Dumber” find a giant fly and it’s amazing.”

First of all, we got to talk about this giant fly because she’s both visually impressive and oddly hilarious. The fly, that Jean-Gab eventually names Dominique, has a very cool look to her incredibly creepy at times and oddly adorable to the point where you just want to hug her. Once the two pop open the trunk to find her, there’s this distinct curiosity that washes over you making you wonder what’s exactly going happen when Dominique is able to fly again. Is she going to attack them or just fly away? There’re definitely some signs that build up this anticipation, including Dominique having some alone time with a small dog, but it’s hard to look at her as anything but strangely harmless as she just adorably drinks water from a pool and looks so innocent with those giant fly eyes. Also, the visual effects on her are actually pretty impressive they contain a nice amount of detail and she feels like she’s actually a part of the world. Dominique wouldn’t be anywhere though without Manu and Jean-Gab – the film’s dream team who slowly start to steal your heart. These two carry a similar reminiscence to other dynamic duos like Harry and Lloyd or Bill and Ted, but come into their own through Dupieux’s great comedic writing. Although they start out as just your run of the mill bums, Manu and Jean-Gab quickly start to grow on you as they attempt to navigate training the fly while finding their way in the world. From the way they clumsily get through situations and have no real plan as to how to domesticate Dominique to how they stayed unassured and are generally looked over by everyone around them, these two are comedic gold. Their lines are hilarious, they give off good vibes with every scene they’re in, and the friendship they have with one another is just so adorable and likeable that every time they do their infamous toro handshake you want to join in. Dupieux nails it in creating a lovable duo that Ludig and Marsais bring to life with their incredibly funny performances. 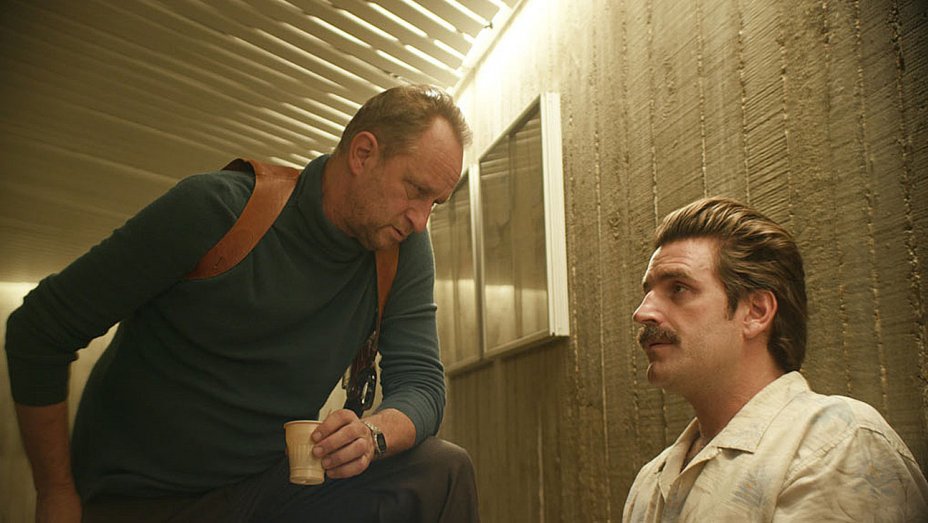 Speaking of great performances, there’s no way that Adele Exarchopoulos’ performance as Agnes can be overlooked. Suffering from a brain injury she got from a skiing accident, Agnes screams everything she says and it’s absolutely hilarious. Every single line that she says is yelled and it’s not even set up, so when we’re first introduced to her and she just starts screaming it catches you off guard and then becomes the funniest thing in this movie. Exarchopoulos looks like she’s having a blast just screaming about everything and the way she takes on sort of an antagonist role since she’s very suspicious of Manu and Jean-Gab is great. She’s the kind of character that makes everything she’s involved in hilarious and the second she pops up on-screen it’s impossible not to crack a smile. It’s an excellent comedic supporting performance from Exarchopoulos that comes out of nowhere and one that viewers will never forget.

“Dupieux returns with a hilarious tale of two friends and a fly that makes for the funniest film of the year.”

Honestly, the same can be said about “Mandibles” story as it’s one I don’t think I’ll forget anytime soon as it’s slowly growing on me the more I think about it. It’s a story about nothing that sort of comes to nothing but ends up making you feel something special about friendship with how much you grow to care about Manu and Jean-Gab. They’re two unassuming heroes that are simply trying to make their way in the world with a giant fly and watching them stumble into misfortune and dumb luck is oddly heart warming and fun to watch. Even the random monologue that Manu has about friendship at the end, which is just hilariously full of movie cliches, is great and the note that the film ends on showcases the kind of bond that Manu and Jean-Gab have created with Dominique – and it’s pretty awesome. Dupieux returns with a hilarious tale of two friends and a fly that makes for the funniest film of the year. “Mandibles” contains all of the comedic strangeness that one would expect with a film from the mind of Dupieux, but also harnesses good vibes of friendship, incredible performances, and one amazing gigantic fly that are perfect for anyone and everyone feeling down and out about 2020.