“American Psycho” is now twenty years old, and yet this psychological thriller, bathed in hilarity and chock full of underlying societal context, is still as effective as it was then. This is primarily due to the amazingly spot-on performance from Christian Bale, and the confident direction of Mary Harron.

With a screenplay adapted by Mary Harron and Guinevere Turner based on Bret Easton Ellis’ novel, the movie is an exercise in control as much as it is about the loss of it. Our main character is all about his routines, his ability to keep everything in check, but there’s something festering beneath that he can’t quite keep contained. END_OF_DOCUMENT_TOKEN_TO_BE_REPLACED

This is a straight-forward feel good film that encourages you to root for the underdog. Christian Bale is so appealing as a quirky mechanic and WW2 vet who has perhaps a touch of PTSD which occasionally leads him to unacceptable social interaction. Matt Damon has his best role in years as Bale’s sometime employer and friend who shares his passion for auto racing. Together they take up the challenge of winning Le Mans from the powerful Ferrari company, but must contend with various egos at Ford Motors to realize their dream. END_OF_DOCUMENT_TOKEN_TO_BE_REPLACED 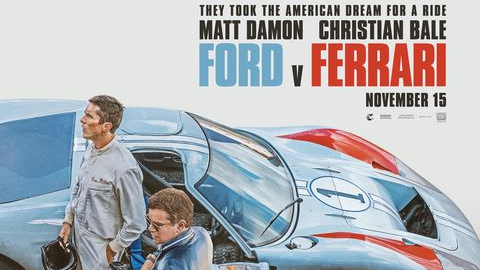 Biopics can be a hard sell at times. “FORD v FERRARI” is one of the latest true stories out of Hollywood that will be hitting the big screen, and here’s why this one deserves to be seen whether you are a racing fan or not, it absolutely deserves your attention.

In the mid-’60s, Ford and Ferrari fought it out for real at most brutal of all car races, the 24 Hours of Le Mans, a road race that lasts almost as long as this film. At a whopping 152 minutes, director James Mangold’s biopic is no quick win, but buckle up and sit back for the duration and you will be rewarded with a film that delivers great performances, a gripping tale of determination and courage, and some truly spectacular racing scenes (real or CGI? I couldn’t tell). END_OF_DOCUMENT_TOKEN_TO_BE_REPLACED

Self-proclaimed satirist and author Bret Easton Ellis is less than a fan of the cinematic adaptation of his novel, “American Psycho” (2000). Not besmirching the film, instead noting it’s key differences – director Mary Harron focus homed in on Ellis’ own goals but made them largely accessible for a mainstream audience, or at least the cult following it now has.

In adaptation, the film’s success lies in two major aspects; its direction, and in turn the performance of Patrick Bateman, a role only Christian Bale could carry in this incarnation of the text. As time has gone on, Marron’s cutting irony, and Bale’s synonymous grin, as he plunges headfirst into depravity without a second thought to his image is inspiring for actors who fear taking roles which ‘tarnish’ their image. END_OF_DOCUMENT_TOKEN_TO_BE_REPLACED