What is the first image that comes to your mind upon hearing the term “sex symbol”? Could it perhaps be the famous image of Marilyn Monroe and her billowing white skirt? Could it perhaps be a provocative album cover of Madonna–or even a sensual smirk and devilish eyes on the face of Elizabeth Taylor? What if I told you that sex symbols existed even before some of your grandparents were born; would you have any trouble buying that?

Well, get this, in 1885 an infant, with the name Theodosia Burr Goodman was born. An infant who would grow to be so hauntingly beautiful  that a simple glance at a vintage photograph of her could stare at and bury itself into the deepest recesses of your very soul. This woman is none other than Theda Bara: one of America’s most prolific silent film actresses–one of cinema’s first sex symbols. A woman known early on for her femme fatale roles, she had earned (or rather, as her later life would prove perhaps, been cursed with) the nickname “the vamp”. 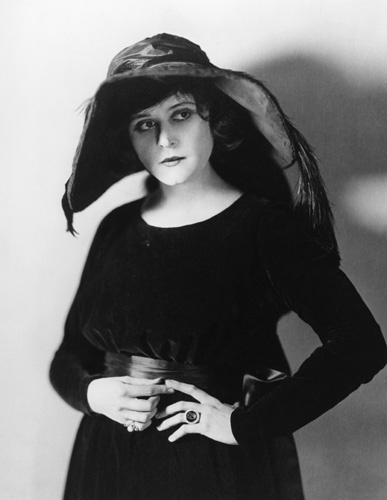 She was born to a prosperous Jewish tailor (Bernard Goodman), and his Swiss wife (Pauline Louise Coppett) on July 29, 1885 in Cincinnati, Ohio. Her sister, Lori, also had a career in acting. Theda is known to have always maintained a close and warm relationship with her family.

Theda Bara–her stage name–is known to have been widely disputed. According to “The Guinness Book of Movie Facts and Feats”, it had allegedly come from director Frank Powell. Powell had supposedly learned that she had had a relative named Baranger. In quite the unforeseen and slightly comedic twist, during the 1917 press tour for Cleopatra, some publicists noted her name was actually an anagram for “Arab Death”. Inaccurate and outright false tall tales emerged from the film’s promotion; one of them actually had a press agent claiming Bara was born to an Arab Sheik in the Sahara.

It was also in 1917 that she had legally changed her surname to Bara. She had gone on to work in theater productions after having attended the University of Cincinnati for two years. After having explored other projects, she moved to New York in 1908. Broadway and its audiences saw her many talents that same year when she made her debut in “The Devil”.

“For a time, she was known to be one of the most popular movie stars—having risen to the heights of fame of both Mary Pickford and Charlie Chaplin. Given her nickname and reputation–she made various attempts at changing her image in the public eye by avoiding typecasting.”

For a time, she was known to be one of the most popular movie stars—having risen to the heights of fame of both Mary Pickford and Charlie Chaplin. Given her nickname and reputation–she made various attempts at changing her image in the public eye by avoiding typecasting. She did so by signing on to more wholesome roles in films like “Her Double Life”,  “Under Two Flags”, and “Shakespeare’s Romeo and Juliet”. Despite her best efforts, she failed to have a diverse career because she was known too well as an “exotic wanton woman”.

Eventually, Hollywood’s Golden Age motivated her to move to Los Angeles. While there, she filmed “Cleopatra” (1917), which went on to be one of her biggest hits. Unfortunately, because of the infamous vault fire in Fox Studios in 1937, only a few fragments of the film still exist. Up to 40 of her films produced from 1914 to 1926 were lost.

“She was known for bravely wearing revealing costumes–perhaps in an effort to de-stigmatize women’s sexualities. These costumes were considered to be risque for the time, and would perhaps turn some heads even today, nearly a whole century later.”

Eventually, she had had it with being typecast as “the vamp”, and as such, she ended her contract with Fox immediately after her final film with them, “The Lure of Ambition”. Naturally, without Fox studio’s support, her career tanked. It was only in 1925 that she began to work in film again, attempting to reignite her career film “The Unchastened Woman”. In 1926, Bara attempted to parody her vamp image in Hal Roach’s “Madame Mystery”.

She was known for bravely wearing revealing costumes–perhaps in an effort to de-stigmatize women’s sexualities. These costumes were considered to be risque for the time, and would perhaps turn some heads even today, nearly a whole century later. Costumes of this sort were, by virtue of the then-newly established Production Code of 1930 (which went on to be more strongly enforced in 1940), subsequently banned.

In 1921, her career slowed down significantly after her marriage to Charles Barbin. After they had wed, she had only made two motion pictures before completely retiring from acting in 1926. All her films were silent ones; never had her voice been broadcasted in a room with a humongous silver screen in it.

Bara and Barbin had no children. It was made apparent that Barbin deemed it improper for a wife to have her own career. Many suspect this is why she left the silver screen behind; though many consider that by 1921, her career had already been fading away from the public eye. The year was 1949 when talks of a biopic about her began. Producer Buddy DeSylvia of Columbia Pictures had initially been attached to the project–he had star Betty Hutton in mind to portray Bara. To the dismay of many, the project never came to fruition.

On April 7, 1955 she lost her battle against stomach cancer and passed away. She was interred as Theda Bara Brabin. Her final resting place is in Forest Lawn Memorial Park Cemetery in Glendale. Although she has been deceased for nearly an entire lifetime, both her reputation and notoriety as a silent film star have been essential in cinematic history. Although she was unable to liberate herself from her nickname, “the vamp”, she will always have had the last word: Bara said in her life “I will continue doing vampires as long as people sin”.