“THE IRISHMAN”  is both a period piece and an almost historical type piece as you need to know a little history to understand the direction of the narrative and flow of this epic film. The movie, while following Frank “The Irishman” Sheeran (Robert De Niro) as our designated main character, revolves around Teamsters union boss James “Jimmy” Riddle Hoffa (Al Pacino). Fortunately Frank goes to great lengths to narrate the story for the audience and provides a healthy dose of context for those of us not from the Kennedy era.

The main thing you need to know going in is that Jimmy Hoffa had mob ties, and that he vanished in 1975 and was presumed murdered by mob bosses for being “uncooperative”. While I’m sure a few ‘liberties’ have been taken by the film, it does make you go ‘hmmmm’ more than once after viewing.  It’s good to note as well, that it is based on the book “I Heard You Paint Houses” by Charles Brandt, who’s legal career cannot be disputed. Once you do see the movie, you will understand how perfectly rich that title is.

The movie unfolds over four acts, told over several decades by Frank Sheeran. In act one, Frank is introduced as a WWII veteran who is stuck driving food delivery trucks in and around Philadelphia. He has the bright idea to steal some of the steaks that he’s delivering, and sell them to local mobster Felix “Skinny Razor” DiTullio (Bobby Cannavale). Eventually, his brazen willingness to break the law catches the eye of Italian mob boss Russell Bufalino (Joe Pesci), who happens to be a mobster on a national level, a man who might be commonly be referred to as an ‘underboss’ in the mafia levels structure. His calm demeanour is both comical yet terrifying. A soon to be classic line encompasses Bufalino perfectly: “You might be demonstrating a failure to show appreciation.”

“There’s a reason Martin Scorsese will forever be known for his gangster movies. Combining comedy, violence, brotherhood and drama, he has created a formula that continues to work.”

Under his mentorship, Frank becomes a ruthless action/hitman for the Italian mob and explains with rather entertaining dispassion how he does his job properly. In act two, Russell introduces Frank to Jimmy Hoffa, the outspoken and fearless president of the National Teamsters Union. Their relationship grows and Hoffa becomes Frank’s second mentor. Together they use intimidation and bribery to gain influence until the election of John Kennedy, who subsequently appoints his brother Bobby Kennedy as Attorney General and he immediately goes after Hoffa. 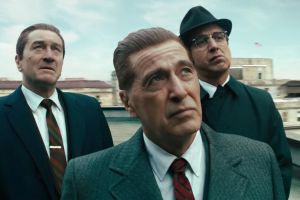 The first two and a half hours are the most fun, and in particular, the end of act three is some of the most tense and dramatic storytelling that I have had the pleasure of seeing in recent memory. At a dinner celebration for Frank (who eventually becomes a Teamster boss himself), tensions between Hoffa, Bufalino and the other mobsters reaches a breaking point, and the decision is made to make Hoffa disappear. But in a gut-wrenching twist that you had a feeling just might be, Frank is the one tasked to do the job. In a beautiful display of cinematography over a thirty-minute buildup, Scorsese forces the viewer to the edge of their seats with the dread of what’s about to happen. Robert De Niro’s performance in these moments is master class; the inner conflict is all the more apparent thanks to all of the time we spent watching Frank being groomed by Bufalino and Hoffa in equal measure.

“The heart of the movie is definitely Robert De Niro, Al Pacino and Joe Pesci…Al Pacino is an absolute over-the-top riot as Hoffa…De Niro on the other hand, goes for the more understated, it as if he is the ying to Pacino’s yang that makes this pairing so wonderful to watch together.”

Getting away from the plot a bit, the movie is actually surprisingly funny. In one particular scene, someone insults an older Bufalino at a dinner reception. He and Frank exchange glances and the frame suddenly cuts to a hotel bed covered in guns. Frank then narrates with excess detail and hilarious dispassion the ideal weapon for a public assassination. Moments like these are thrown throughout the film and keep it from getting too bogged down in its violence. It’s impressive how quickly jokes fly, given the disproportionate amount of people getting shot point-blank in the head.

The heart of the movie is definitely Robert De Niro, Al Pacino and Joe Pesci. De Niro was de-aged apparently with some really good CGI, as he is supposed to be younger than both Pacino and Pesci. While it’s fairly obvious, it was never too distracting to not enjoy what was unfolding onscreen.  Al Pacino is an absolute over-the-top riot as Hoffa, and is certainly one of the best roles that Pacino has bitten into and played in awhile.  While De Niro on the other hand, goes for the more understated, it as if he is the ying to Pacino’s yang that makes this pairing so wonderful to watch together. Pesci as Bufalino is chilling, and it’s fun to seem him as the boss in this gangster movie after being a junior-level mobster in ‘Goodfellas’ so many years ago. The mentor-ship between De Niro’s character and both Pacino and Pesci is amazingly entertaining.

Mention must be made of the flawless ensemble cast which backs up these principals, including the amazing women, who play such important, but background roles in the film is the cushion that rounds out these characters and nuances of storyline. Kathrine Narducci, Ray Romano, Anna Paquin and Aleksa Palladino to name just a few, and while not always front and centre, they add so much into the texture of their scenes.

The only thing keeping me from calling this movie perfect is it’s length. The almost three and a half-hour run time is a very long one, and while occurring infrequently, the movie does drag a bit. This is most apparent in the fourth act where Frank introspects during his final years and attempts to achieve reconciliation for all the murders he’s committed. It doesn’t really offer any closure or seem necessary to wrapping up the narrative.

“Mention must be made of the flawless ensemble cast which backs up these principals, including the amazing women, who play such important, but background roles in the film.”

Ultimately that doesn’t even come close to making me not recommend seeing “The Irishman” at all. There’s a reason Martin Scorsese will forever be known for his gangster movies. Combining comedy, violence, brotherhood and drama, he has created a formula that continues to work. The fact that he continues to still make such excellent movies after all these years, well it says a lot about the man himself.  Well done Mr Scorsese, well done.

“THE IRISHMAN” NOW PLAYING IN SELECT THEATERS // ON NETFLIX NOVEMBER 27, 2019