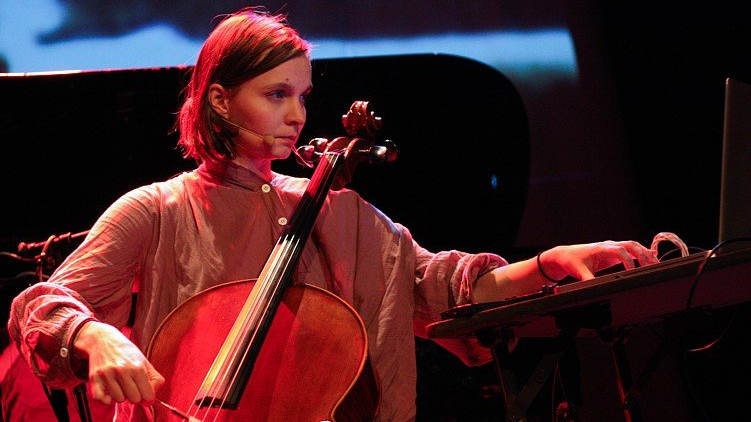 Regardless of whether you’re a fan or not of Todd Phillips‘ “Joker“, I think we can all agree that Hildur Guðnadóttir‘s score is phenomenal. A classically trained cellist from Iceland, she has played and recorded with various bands such as Pan Sonic, Throbbing Gristle, Múm, and Stórsveit Nix Noltes. She experiments with sound and musical instruments, using cello, warped samples, and nuclear reactor metal as her tools to compose her music. And, the end result is stunning.

Her music has a way of invading your mind, the score for “Joker” has a rawness to it, full of menace and a foreboding sense of dread. The score for “Joker” is so far from the epic orchestral scores we usually associate with comic book adaptations, and as she explained in an interview with Film Music Mag this was a deliberate decision, “we went as far in the other direction with this score as possible.

In what is perhaps the best scene of the film, a simple key change in the music leads to Joaquin Phoenix‘s Arthur performing a ballet style dance underneath the flickering lights, as if only he can hear Guðnadóttir’s music. It’s a beautiful moment if beauty is the right word to use in this context? There’s something about Guðnadóttir’s work that has that effect on us, and like Arthur we become hypnotized by the music, feeling compelled to dance to it.

What is most unique about the score for “Joker” is that Guðnadóttir pays homage to Bernard Herrmann‘s score for “Taxi Driver” (1976), a film that Todd Phillips has noted as an influence for “Joker”. There’s a deep-rooted sadness running throughout the music, but as Arthur transforms into the character of the Joker, the music changes with him, becoming a whole different type of beast.

“The world of film composing is still very male-dominated, so Guðnadóttir’s win at the Venice Film Festival for her work on “Joker” and her Emmy win for “Chernobyl” is a huge achievement.”

It’s hard to pick out one piece from “Joker” which is my personal favourite. The music at the start of the film (entitled ‘Hoyt’s Office‘) gives the impression of a ticking time bomb, and the music coupled with slow zoom onto Phoenix’s face as he gives a sly smile helps to give us an indication of the threat that lies inside the character of Arthur. The cello is paired with a drumbeat for ‘Defeated Clown‘ creates an ominous feeling, it’s almost like a call-to-arms, sinister and menacing, sending shivers down our spine and causing the hairs on our arms to stand on end.

The slow buzzing sound at the start of ‘Subway‘ gives the impression that a nuclear reactor is about to blow, and if you know what takes place in the scene, then this is the perfect analogy. The music in ‘Subway’ descends into drawn-out strings, forlorn sounding horns, and wails as if giving us an insight into the sounds that rattle around inside Arthur’s head.

You may not know who Hildur Guðnadóttir is prior to her work on “Joker”, but it’s more than likely that you will recognize her work. She has composed music for the likes of Tobias Lindholm’s “A Hijacking” (2012), Denis Villeneuve’s “Prisoners” (2013) and “Sicario” (2015), Alejandro G. Iñárritu’s “The Revenant” (2015), Yance Ford’s documentary “Strong Island” (2017) and most recently Guðnadóttir composed the music to the critically acclaimed HBO series “Chernobyl”.

In fact, she won an Emmy for her music for “Chernobyl” going up against T Bone Burnett and Keefus Ciancia music for “True Detective” as well as the likes of Kros Bowers for “When They See Us”. Her music for “Joker” also saw her taking home the Premio Soundtrack Stars award at the 76th Venice International Film Festival.

The world of film composing is still very male-dominated, so Guðnadóttir’s win at the Venice Film Festival for her work on “Joker” and her Emmy win for “Chernobyl” is a huge achievement. In fact, the situation with the lack of female composers being commissioned for work is very dire. Tim Greiving‘s piece for The New York Times stated that “A 2018 study by the University of Southern California revealed that for the top 100 fictional films at the box office every year from 2007 to 2017, only 16 female composers were hired, compared with more than 1,200 men.”

“In fact, if Guðnadóttir is nominated and wins an Oscar for the best original score at this year’s Oscars, then she will be the fourth female composer to do so.”

Martha M. Lauzen‘s 2018 study for Center for the Study of Women in Television and Film, San Diego State University, referred to as The Celluloid Ceiling (which has tracked women’s employment on top-grossing films for the last 21 years) found that out of the top 250 films at the domestic box office in 2018, 94 percent were scored by men. During an interview for Esquire, Guðnadóttir addresses the fact that the world of film composing “has been “extremely male-dominated”, but “there’s a change definitely happening.””

In fact, if Guðnadóttir is nominated and wins an Oscar for the best original score at this year’s Oscars, then she will be the fourth female composer to do so. Previous winners have included Marilyn Bergman for “Yentl” (1983)–back then, the Oscar category was named “Original Song Score and Its Adaptation or Adaptation Score”–, in 1996 composer Rachel Portman won for “Emma” and Anne Dudley in 1997 for “The Full Monty”. In fact, 1997 saw two female composers going up for the Oscar, with Lynn Ahrens being nominated for her score on the animated film “Anastasia”.

Since 1997 there have only been two other female composers to be nominated, these include Rachel Portman who was nominated in 1999 for “The Cider House Rules” and then again the following year for “Chocolat”. It wasn’t until 2016, that a female composer would be nominated for the Oscar, this time it was Mica Levi for “Jackie”.

This year could see Mica Levi go up against Guðnadóttir for her score on “Monos” (the film wasn’t exactly my cup of tea, but Levi’s score is incredible). If either Levi or Guðnadóttir was to win for their work then it would be an amazing achievement that they both rightly deserve. One can only hope that with the box-office success of “Joker” this will lead to doors opening for the likes of Guðnadóttir and other female composers because they are out there and with more and more female-centric films being greenlit, it’s high time that those films be scored by female film composers.