Writer: Sofia Coppola (based on the novel by Thomas Cullinan)

Sofia Coppola’s American Southern Gothic film, “The Beguiled” (2017), is an atmospheric drama that takes place at a girls’ school in Virginia in 1864. The American Civil War rages around the house, ever-present despite the lack of action. The film features a trio of talented blonde women — Nicole Kidman, Kirsten Dunst, and Elle Fanning — in addition to Colin Farrell. While it’s not the masterpiece that some of Coppola’s other films like “Marie Antoinette” (2006) or “The Virgin Suicides” (1999) are, it’s a moving and aesthetically beautiful portrait of women in wartime.

Most of the students and teachers have left Miss Farnsworth’s Seminary for Girls due to the war, but five students and one teacher remain along with Martha Farnsworth (Nicole Kidman) herself. One of the students discovers a wounded Union soldier in the woods and brings him back to the house. Miss Farnsworth and teacher Edwina Morrow (Kirsten Dunst) tend to his wound and agree to let him stay until he has regained his health rather than turning him over to the Confederate soldiers immediately. Soon, the presence of the handsome soldier sparks discord within the house as each girl seeks his attention for herself.

The film is based on the novel of the same name by Thomas P. Cullinan, which was originally published as “A Painted Devil.” This movie is pointedly not a remake of the 1971 film adaption by Don Siegel, but a re-adaptation of the novel. Coppola sought to refocus the story on the women of the school, the dynamic between them, and how it is disrupted by the appearance of Corporal McBurney. Coppola’s screenplay is particularly good for a movie where so many things lie unsaid. Nothing demonstrates a group of women in over their heads like the phrase “Edwina, bring me the anatomy book” as Miss Farnsworth tends to the Corporal’s injuries.

“Coppola creates a beautiful picture of an otherwise gruesome war; Everything from its costuming and limited score, to its cinematography, creates an engaging atmosphere.”

There was some controversy around the film’s release about Coppola casting Dunst as a character that was originally biracial and removing a black female slave supporting character from the novel. Coppola said that she didn’t want to touch on issues without delving into them and didn’t feel that the character that she cut was a good one for the young girls who watch her films to see. Understandably, it does feel odd to watch a movie set during the Civil War in the South that doesn’t address race, but that it simply wasn’t the story that Coppola was setting out to tell. 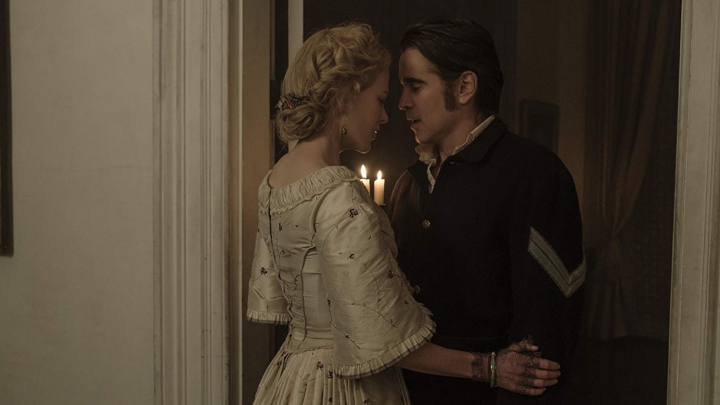 Coppola’s direction is graceful and deliberate. She manages to create a film largely focused on repressed female sensuality and flirtation without it ever feeling as though the women are objectified or subjected to the male gaze. The older women of the household are firmly in control of their sexuality, even if they seem unaware of how dangerous the game that they’re playing is.

The film seems to crawl along at a slow speed, despite its 94 minutes run time. Certainly, this is intentional as it demonstrates the sense of stagnation that these women feel as they go about their daily lives waiting for the war to end. The editing by Sarah Flack and the cinematography by Phillipe Le Sourd build a hazy, dreamlike quality. It’s a film in which you can feel the oppressive heat which perhaps pushes the girls into being both more lethargic and more volatile than expected. The dimly lit shots, both interior and exterior, lend themselves to a film where much is left in the shadows and the natural lighting used adds to the period effect.

“Through Coppola’s lens, The Beguiled finally returns to the female-centric perspective of Cullinan’s novel”

The performances from the whole cast are great, with the child actresses playing their parts naturally and blending into the period setting in a way that sometimes children struggle with. The well-done Southern accents of the women contrast nicely with Farrell’s native Irish accent. Farrell is appropriately both menacing and charming as the Yankee soldier and Kidman is restrained and dignified as Miss Farnsworth. Dunst is Coppola’s golden girl and she certainly delivers here as the delicate teacher who eagerly seizes a way out of the life she’s living, but isn’t ready for the consequences of her actions. Elle Fanning is another standout of the cast as the languid teenage student whose lazy line delivery builds a portrait of simmering teenage sexual angst.

The costumes, designed by Stacey Battat, are a highlight of the film. Battat used the archives of the Metropolitan Museum of Art to design period-appropriate pieces and used cotton fabric for accuracy. The fancier gowns of the dinner scene are particularly exquisite. The film features many beautiful shots of Madewood Plantation House in Louisiana, where the exterior scenes were filmed. This emphasis on the large white plantation house seems to highlight the lost world of the pre-war South that these women are still clinging to as best they can, playing music and drinking digestifs after dinner.

At the 2017 Cannes Film Festival, the film was chosen to compete for the Palme d’Or award and Coppola won Best Director, becoming the second woman to ever win the prestigious prize. While the film made $27.4 million dollars, it had no success at the Oscars not even receiving a single nomination.

“The Beguiled” is an oddly graceful movie for its dark subject matter. It’s difficult to explain exactly what it’s about or what its point is. But I’m not sure you need to. The important thing is that it’s a movie that builds its atmosphere skillfully, features great performances, and clearly feels like a movie about women made by a woman.