You wouldn’t imagine a film titled “The Virgin Suicides” (1999) would be beautifully atmospheric and dreamlike. Or maybe you would if you knew it was written and directed by Sofia Coppola who is known for brilliantly capturing an atmosphere with her films whether it’s the 1990s in Los Angeles with “The Bling Ring” (2013) or our collective memory of a lavish queen with “Marie Antoinette” (2006). Coppola’s directorial debut is a tale about five young girls who commit suicide and perhaps more poignantly, the neighborhood boys who are obsessed with them. For as much as it’s a film about mental health and girlhood, it’s also about collective memory and the impact that a few people can have on a community.

“The Virgin Suicides” follows the Lisbon family, made up of five beautiful blonde daughters and their strict Christian parents. The film is told in retrospective, narrating events that took place twenty-five years before, from the perspective of one of the four neighborhood boys who watched and analyzed and discussed the Lisbon sisters. After the youngest girl Cecilia attempts suicide, their parents first attempt to socialize the five sisters and later completely isolate them from the outside world.

“The film has a shot of Cecilia in the bathtub surrounded by her own blood early on, but suicide is never shown onscreen. To be a film that revolves around the act, it never feels like it’s exploited or overly romanticized.” 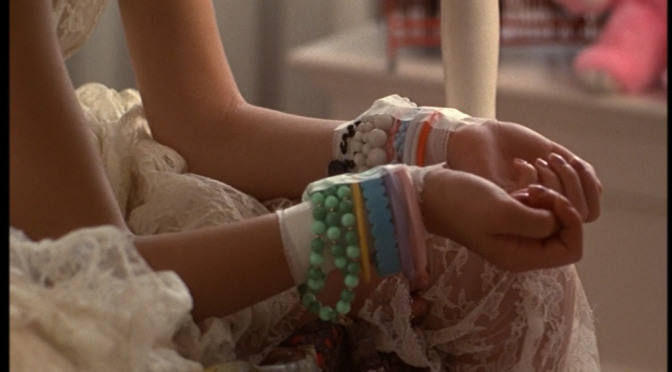 The girls — Cecilia, Lux, Bonnie, Mary, and Therese, range from 13- to 17-years-old and all look like blonde angels. The girls’ actual issues beyond their isolation and repressive parents aren’t really delved into. When a doctor questions her motivations for attempting suicide, Cecilia responds, “Obviously, Doctor, you’ve never been a 13-year-old girl.” The film leans into the difficulties of being a teenage girl, perhaps most poignantly through the character of Lux, the second youngest daughter, who is attempting to explore her burgeoning sexuality despite her parents’ restrictions. Kirsten Dunst, a criminally underrated actress, is dynamite, as usual, striking the perfect balance between youthful innocence and blossoming passion.

The audience is kept both very close to and yet distant from the girls, much like the neighborhood boys. We never are allowed into their heads nor does Coppola dive into their specific motivations for suicide. The film has a shot of Cecilia in the bathtub surrounded by her own blood early on, but suicide is never shown onscreen. To be a film that revolves around the act, it never feels like it’s exploited or overly romanticized. 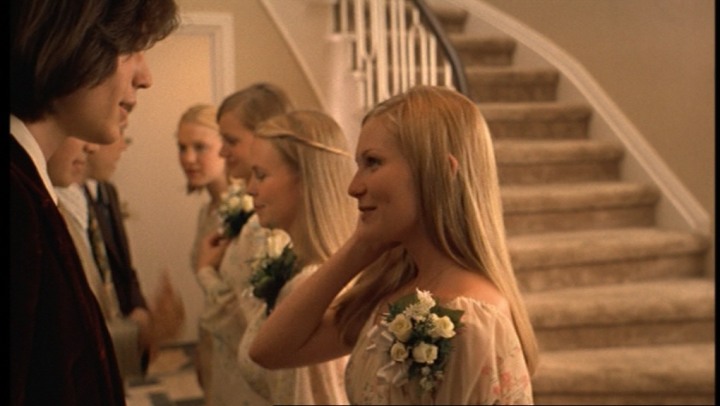 In some ways, the film is more concerned with the boys who are the girls’ peers and who eagerly watch for a glance of the sisters and collect items related to them. Their obsession with the girls grows the more isolated they become. It also shows how the families throughout the neighborhood speculate about the family and the television coverage about the events with a nosy reporter eager to get a good scoop. These combined with the school distributing pamphlets about suicide show the laughably ineffective ways that the adults of the film deal with the suicides, subtly critiquing modern society and its treatment of mental health issues.

“The film’s core has much more to say about how someone’s suicide is perceived and remembered by society as a whole than about the act of suicide itself.”

The film has a dreamlike quality to it, perfectly demonstrated by its depiction of Lux’s romance with school heartthrob Trip Fontaine. It captures teenage nostalgia and the feelings of young love when having a crush is both agony and bliss. Trip is played by a young Josh Hartnett who absolutely nails the role. It’s easy to get swept away in Trip and Lux winning homecoming king and queen as “Sail Away” plays in the background; all is lovely and hazy, like a beautiful memory of a high school experience you never truly had.

“The Virgin Suicides” is a surprisingly enjoyable watch, largely due to Coppola’s impeccable style. It’s easy to get swept up in the world that the girls inhabit and become as fascinated by them as the boys are. But the film’s core has much more to say about how someone’s suicide is perceived and remembered by society as a whole than about the act of suicide itself. We are allowed a glimpse into the memory of these boys and we too are almost close enough to say we know the Lisbon sisters without really ever knowing them at all.